Albert del Rosario net worth: Albert del Rosario is a Philippine business executive who has a net worth of $657 million. Since 2011, he has been serving as the Secretary of Foreign Affairs of the Philippines. Albert del Rosario was born on November 14, 1939 in Manila, Philippines. His grandfather, Judge Simplicio Sempio del Rosario, was a delegate to the Malolos Congress. Del Rosario attended Xavier High School in New York, and went to New York University, where he graduated with an Economics degree. From 2001 to 2006, Albert del Rosario was the Philippine ambassador to the United States under Gloria Macapagal-Arroyo, who was president at the time. He stepped down in 2006 after conflicting viewpoints with the Arroyo government; del Rosario has warned against hiring more lobbying groups in the Philippines after receiving threats of national security. In 2011, he was appointed to the position of Secretary of Foreign Affairs by current president Benigno Aquino III. In May 2012, del Rosario asked for the United States to supply the Philippines with coastal surveillance facilities, aircraft, naval patrol vessels and advanced radar systems. This was done in order to maintain the Philippines' sovereignty against the Chinese, who were attempting to gain control over the South China Sea. 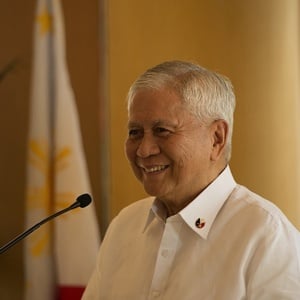