How much is Xuxa Worth?

Xuxa Meneghel Net Worth: Xuxa Meneghel is a Brazilian singer, film actress, businesswoman, TV host, entertainer who has a net worth of $160 million. Xuxa Meneghel was born on March 27, 1963 in the town Santa Rosa. Successful in any filed that she had chosen to work in, Meneghel has eventually become one of the richest women in Brazil. She was 15 when she made her career beginnings as a model. Next, she stepped into the music and entertainment world. During that period, she was introduced to many celebrities. By the time she turned 17, she started to date the legendary footballer Pele. As rumor has it, Pele was the influential factor for making her career skyrocket. In her singing days, she managed to release 28 studio albums, 13 compilations, 8 Spanish Albums and over 110 singles. As her greatest success is considered her third album "Xou Da Xuxa 3", which sold more than three million copies. At the age of twenty she was invited to host a children's show called "The Children's Club", which became an overnight hit. Thus, in 1985, she was given the opportunity to host her own show eponymously called "The Xuxa Show". Four years later, she started to host another TV show which was broadcasted only on Sundays. Since then, she has been one of the most recognizable TV faces in Brazil. The Xuxa Show still broadcasts and remains very popular. Same as in TV, she had a great success in the movie industry. Her first movie was the controversial "Amor Estranho Amor", after which came such movies as "Super Xuxa contra Baixo Astral", "Lua de Cristal", "Xuxa Requebra" among many others. A great philanthropist as she is, Xuxa Meneghel has also left a mark with her charity work. Even though she has widely contributed to all sorts of initiatives, her work on the campaign against polio is considered as one of her biggest achievements. As a result, she was even honored with the Medal of Honor by the Brazilian president. 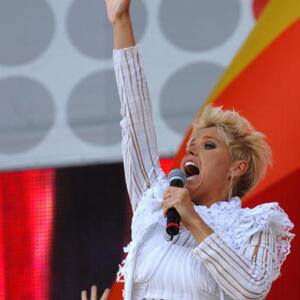