William Hung net worth: William Hung is an American singer who has a net worth of $600 thousand. William James Hung Hing Cheong was born in Hong Kong in January 1983. He moved to New Jersey in 1983 and graduated from high school in Los Angeles. He attended the University of California, Berkeley, but dropped out to pursue a career in music.

Hung gained fame in 2004 when he auditioned for American Idol performing a cover of Ricky Martin's "She Bangs". He signed a record contract with Koch Entertainment and released three albums. He has had many fans and critics alike. There has been controversy regarding Hung and his fans promoting racial stereotypes against Asians. He built up a cult like following. Hung has appeared on Jimmy Kimmel Live!, Entertainment Tonight, the Late Show with David Letterman, The Howard Stern radio Show, The Ellen DeGeneres Show, and many more. He has appeared in commercials for the Game Show Network, Cingular Wireless, and Ask.com. He appeared in the 2004 film Where is Mama's Boy. His first album Inspiration sold 200,000 copies in the U.S. and was #1 on the U.S. Indie charts. Hung's second album only charted 7,000 copies. Hung retired from music in 2011 and became a technical crime analyst. 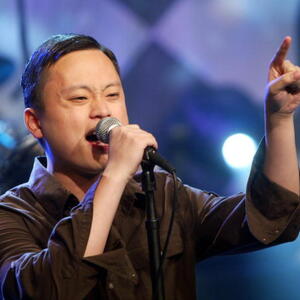