How much is Vinnie Jones Worth?

Vinnie Jones Net Worth: Vinnie Jones is a British actor and former footballer (soccer player) who has a net worth of $10 million dollars. Vinnie Jones was born January 5, 1965 in Watford, Hertfordshire, England, UK. He first came into public notice as a professional footballer, playing in the English Football League. He rose to fame when a photographer at a match snapped a picture of Jones "marking" Newcastle United's Paul Gascoigne by grabbing his testicles. He played for Wimbledon, Leeds United, Sheffield United, Chelsea and Queens Park Rangers. Internationally, he played for Wales.

Vinnie made his first acting appearance in the British comedy/thriller, "Lock, Stock and Two Smoking Barrels" in 1998 at age 33. Jones also starred in the blockbuster, "X-Men: The Last Stand" (2006). He also played the scowling soccer coach in "She's the Man" (2006) with Amanda Bynes. Other projects include a lead role in "Johnny Was" (2006) starring Roger Daltrey, Eriq La Salle and Lennox Lewis. In 2007 he appeared in the independent feature, "The Riddle", starring Vanessa Redgrave and Derek Jacobi.

Over the years, Vinnie has received a number of prestigious awards including Satellite TV's Personality of the Year (1997) from Satellite TV Europe Magazine; Man of the Year by GQ Magazine (1998). Best Actor for Lock, Stock and Two Smoking Barrels (1998) at the Odeon Audience Awards; Outstanding New Talent from the Sir James Carreras Award Variety Club of GB; Best Debut in 1999 for Lock, Stock and Two Smoking Barrels (1998) at Empire Magazine's The Awards 1999; Male Cigar Personality of the Year at the Millennium Cigar Awards; Best British Actor for Empire Magazine's The Awards 2001; Best Supporting Actor in 2002 for Night at the Golden Eagle (2001); at the New York Film Festival he was honored with Best Newcomer for Slipstream (2005) as well as at London's Sci-Fi Film Festival. Jones appeared in Celebrity Big Brother 2010, where he finished in third place behind Dane Bowers and Alex Reid.

Personal Life: Vinnie was married to Tanya Terry from 1994 to her death in 2019. 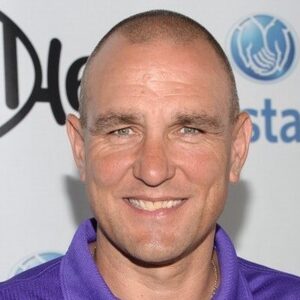