Vanessa-Mae Nicholson net worth: Vanessa-Mae Nicholson is a British violinist and alpine skier who has a net worth of $45 million dollars. Born October 27, 1978 in Singapore, she is of Thai and Chinese descent. Nicholson describes her musical style as violin techno-acoustic fusion. Her success in moving from a child prodigy to becoming a crossover violinist, with album sales reaching several million, made her the wealthiest young entertainer in the United Kingdom in 2006.

She initially became well known in the United Kingdom in her childhood making regular appearances on television shows such as Blue Peter, mostly showcasing her classical music skills and conservative side. By age 13, she became the youngest soloist to record both the Beethoven and Tchaikovsky violin concertos, according to the Guinness World Records. In her teens, she broke away from her traditional reputation and became known for her distinctive appearance. Her first pop-style album, The Violin Player, was released in 1995, followed by an appearance on Janet Jackson's The Velvet Rope album. She has occasionally recorded her own compositions, such as when she recorded China Girl: The Classical Album 2 in 1997. Nicholson also competed for Thailand at the Sochi 2014 Winter Olympics in alpine skiing. 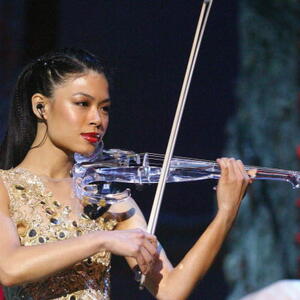