Uri Geller Net Worth: Uri Geller is an internationally known magician, illusionist, psychic, and television personality who has a net worth of $20 million. Born in Tel Aviv, British Mandate of Palestine on December 20, 1946, Geller is best known for his trademarks such as spoon bending, telepathy, and psychokinesis. He began working as a model between 1968 and 1969 and started performing as an entertainer in small nightclubs.

He gained polarity between the United States and Europe and especially appealed to scientists as the were interested in his self-proclaimed psychic abilities. He was performing for television audiences internationally by the 1970s. He published an autobiography in 1975. By the 2000s his acting career had flourished, and Geller appeared in Sanitarium as well as I'm a Celebrity… Get Me Out of Here! He is currently married to Hellen Geller and owns a Cadillac covered in bent silverware donated to him by other celebrities such as the Spice Girls and John Lennon. Michale Jackson was best man at Geller's vow renewal ceremony. Geller attributes his technique and skills to paranormal abilities given to him by extraterrestrials. Several scientists and skeptics have argued his abilities and have tried to prove him wrong. The opinion seems to be divided. He failed to ben tableware on an episode of the Tonight Show in 1973. Geller has published four works of fiction and eight works of non-fiction throughout his career. He pursued a mass demonstration of key bending in 1976 when he appeared on the cover of ESP magazine and had over three hundred positive responses to the attempt. 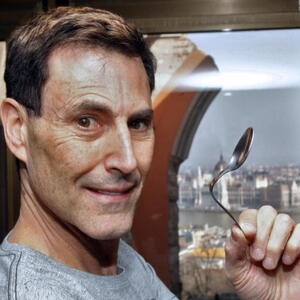