What is Tom Bergeron's net worth and salary?

Tom Bergeron is an American television host of game shows and reality shows. He first gained recognition as the host of both "Hollywood Squares" and "America's Funniest Home Videos." Tom Bergeron's net worth is $14 million.

Tom Bergeron was born in Haverhill, Massachusetts on May 6, 1955. The son of Kay and Ray Bergeron, Tom is of an Irish and French-Canadian background.

He got his first job as a DJ at WHAV Radio in Haverhill. By the 1980's he had made a name for himself in New Hampshire as the DJ of WHEB. He not only played music for radio listeners, but also did interviews and played comedy records. Tom's popularity in the area led to his access to several radio and TV auditions. He subsequently moved on to television, and became the host of the game show, Granite State College on WHEN-TV. He was quickly becoming a television personality, and at WBZ-TV, he handled several duties for Evening Magazine, hosting a short series of previews and information every half hour, on 4 Today.

As if this wasn't enough to do, Bergeron also replaced host Buzz Luttrell on People Are Talking. In 1984, Bergeron snagged the hosting role of "Lottery Live," the Massachusetts State Lottery program, which he hosted every evening. From 1987 to 1989, Tom was the host of the WBZ's morning teenage discussion program called "Rap Around." As time went by, Bergeron's popularity became even stronger, and in the early 1990s The Tom Bergeron Show emerged on WBZ radio. After People Are Talking ended, after a 13-year run, Bergeron remained as a lifestyle reporter and commentator for the WBZ-TV news hour. He also became the morning host on Boston's WMJX radio station.

In 1994 he became the co-host of Breakfast Time, which was later changed to Fox After Breakfast, on the FX cable network. After one year, cast members of the show were changed and it became The Vicki Lawrence Show. Bergeron was the guest host of Good Morning America on ABC and had a six-year run as guest host of Hollywood Squares, for which he won a Daytime Emmy Award for Outstanding Game Show Host. Bergeron hosted over 1,000 episodes of "Hollywood Squares."

Bergeron began hosting ABC's "Dancing with the Stars" in June 2005. He received nine Primetime Emmy nominations for the award for Outstanding Host for a Reality or Competition Program, one of which he took home in 2012. Unfortunately, he was fired from the job in 2020, along with his co-host Erin Andrews, an incident that he announced via Twitter. 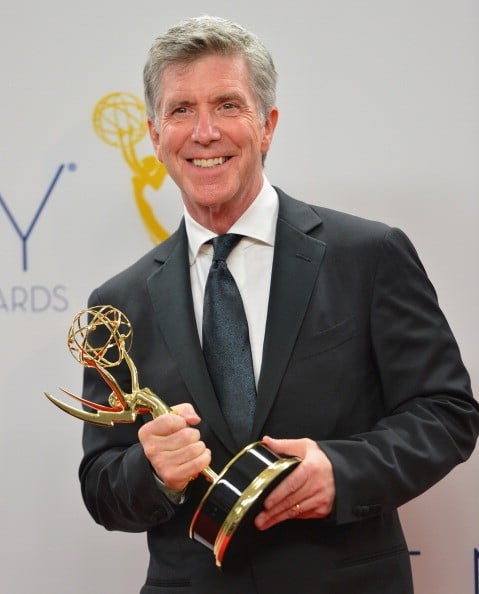 He has also appeared on two episodes of Star Trek: Enterprise. In one episode he played the role of an alien trader, and on the other, a Coridan Ambassador. He was also a guest star on an episode of The Nanny, where he played himself as the host of Hollywood Squares. In 2008, Tom co-hosted the 60th Primetime Emmy Awards alongside hosts Ryan Seacrest, Heidi Klum, Jeff Probst, and Howie Mandel. In 2010 he guest starred in an episode of the television series, Castle, and Tosh O. He was also a guest presenter for the promotion of KSBW's Central Coast ABC Digital Channel. Tom competed in season three of "The Masked Singer" in 2020.

He has written a book telling some of his lessons on life, funny anecdotes and detailed information concerning his career. The title of his first book is "I'm Hosting as Fast as I Can: Zen and the Art of Staying Sane in Hollywood."

He splits his time residing between Los Angeles, California, and Greenwich, Connecticut with his wife, Lois. They have two daughters, Samantha and Jessica. Bergeron is known for his witty sense of humor, charismatic personality and of course, a real gift for gab. Tom has been a practitioner of Transcendental Meditation for his whole adult life and he gives credit to the regular practice for his successful career.

Tom bought his LA home, located in the suburb of Calabasas in 2005 for $1.99 million. Based on similar nearby sales, this home is worth around $3 million today. 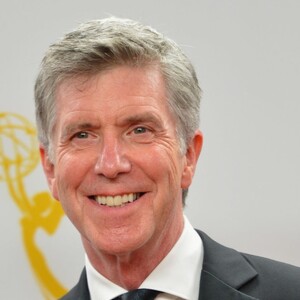