Thom Brennaman net worth and salary: Thom Brennaman is an American sportscaster who has a net worth of $3 million. His annual salary at the peak of his career was $700,000. Thom called baseball games for more than 30 years. In August 2020 he was suspended after a hot mic caught him using a homophobic slur.

Thom Brennaman was born in Chapel Hill, North Carolina on September 12 1963. He is the son of legendary Cincinnati Reds sportscaster Marty Brennaman. His father called games from 1974 to 2019.

Thom graduated from Ohio University and worked for the NBC affiliate WLWT-TV in Cincinnati. Brennaman worked as a play-by-play announcer on television for the Cincinnati Reds with Johnny Bench. He also worked with Harry Caray doing Chicago Cubs broadcasts. Brennaman was the first television voice of the Arizona Diamondbacks. He has also done play-by-play for the Bowl Championships Series and the Big Ten Network. He began broadcasting for the Cincinnati Reds in 2006, working alongside his father until his father's retirement in 2019. Thom has done other Major League Baseball games for Fox.

Homophobic Incident: On August 19, 2020 Thom used a homophobic slur while inadvertently broadcasting during a pregame show. He discovered during the game that the slur was broadcast and attempted to make an on-air apology. He was removed from the broadcast booth mid-game and subsequently suspended. The phrase he was caught saying was "one of the fag capitals of the world", in refernece to an unknown city. 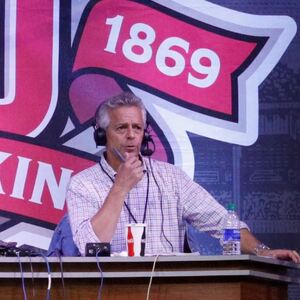