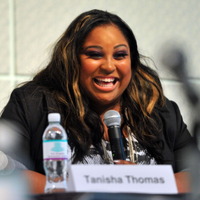 Tanisha Thomas net worth: Tanisha Thomas is an American reality television participant who has a net worth of $100 thousand dollars. Tanisha Thomas appeared on the second season of the Oxygen reality series "The Bad Girls Club". The series takes a group of women with psychological and emotional issues, and attempts to "rehabilitate" them, through activities and challenges that require that they work together. Season Two also required the show's participants to work at with a non-profit. The production is currently in its eighth season. Ms. Thomas has served as host of the spin-off program, "Love Games: Bad Girls Need Love Too", since 2011, and is also the host of "OxygenLIVE", an online talk show that brings various "Bad Girls" together and asks them for the latest gossip and news about their lives and the lives of other former and current cast members. In 2012, the Oxygen Network will begin airing "Tanisha Gets Married", a documentary series about the upcoming wedding of Ms. Thomas.