How much is Tamra Barney Worth?

Tamra Judge net worth and salary: Tamra Judge is an American reality television personality who has a net worth of $2 million. Tamra's salary per season of The Real Housewives is $350,000. Outside of reality TV she co-owns a company called C.U.T. Fitness with her husband, Eddie Judge. She also worked as a real estate agent for Ladera Realtor. She became famous after appearing on the Bravo hit series, The Real Housewives of Orange County, starting in 2006.

Tamra Judge was born in Glendale, California on September 2, 1967. She has three children, (Sophia, Sydney, and Spencer) with her second husband, Simon Barney. Barney was employed by Fletcher Jones Motorcars as a sales consultant, and also worked for a while in tequila sales. Tamra has an older son, Ryan, from a previous marriage to Darren Vieth. In season five of Real Housewives, Simon filed for a divorce on the grounds of infidelity and verbal abuse. Tamra claimed  Simon was the abusive one, both verbally and physically. Tamra moved out of their home but the couple still continued to have disputes over the children.

Even though she has gone through the heartbreak of a dissolved marriage, Tamra has managed to pick up the pieces quite well, with the help of Eddie Judge, whom she began dating not long after her divorce papers were filed. The couple eventually became engaged on the show, and were married in 2013 in a widely-televised event.

Tamra has had a very busy life with her career as gym owner and fitness instructor, mother of four, and her role in Housewives.  In 2015, she also became a grandmother with the birth of her son Ryan's daughter, Ava Vieth. 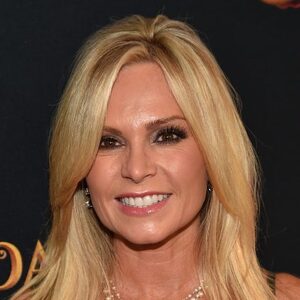