Snooki net worth: Snooki is a Chilean-American reality television personality who has a net worth of $4 million. Snooki has earned her net worth from her role on the MTV reality show "Jersey Shore" which began in 2009. She has also appeared on a number of "Jersey Shore" spinoff shows.

Early Life: Nicole Elizabeth Polizzi was born on November 23, 1987, in Santiago, Chile. She was adopted by New York couple Andy and Helen Polizzi when she was six months old. She grew up in Marlboro, New York. Her adoptive parents are Italian-American. Nicole was shocked to learn that even though she was born in Chile, she is not of Chilean descent. She is a melting pot of ethnicities ranging from Iberian American to East and South Asian to Middle Eastern to Jewish. Her father was a supervisor at an auto salvage yard and her mom was an office manager. She got the nickname Snooking in high school after she was the first of her friends to kiss a boy. The name Snooki is from the movie "Save the Last Dance." Snooki had an eating disorder in high school. She was a cheerleader. After high school graduation, she enrolled at Brookdale Community College to become a veterinary technician.

Reality TV Career: Contrary to public belief, "Jersey Shore" was not Snooki's first foray into reality television. She got her first taste of the world of reality fame on the show "Is She Really Going Out With Him." The MTV show was about women who were dating arrogant, obnoxious or otherwise unsuitable men. Nicole appeared in episode 14 called "Jerz Pud" with her then-boyfriend Justin.

Snooki was scouted by the "Jersey Shore's" casting director. She was by far the breakout member of the cast from not just the first season of the "Jersey Show," but all of them. In 2010, Snooki costumes were one of the most popular costumes available. In 2011, Snooki and her friend and "Jersey Shore" castmate JWoww (Jennifer Farley) signed up to appear in "Snooki & JWoww," a "Jersey Shore" spinoff on MTV. The network called it a modern-day "Laverne & Shirley." The show ran for four seasons before its final episode in February 2015.

Snooki competed in the 17th season of "Dancing with the Stars." She was matched up with professional dancer Sasha Farber. They finished in eighth place after being eliminated on October 28, 2013.

In late 2015, "Snooki & Jwoww: Moms With Attitude," premiered as a web series. The show finished its second season in late 2017.

In December 2019, Snooki announced that she was retiring from "Jersey Shore" on an episode of her podcast, "It's Happening With Snooki and Joey." She said: "I am not coming back for 'Jersey Shore' Season 4 if there is one. The main reason is I just can't do it anymore. Literally, leaving my kids to film it is really hard on me. I try and quit every single day. I just hate being away from the kids. I don't like partying like three days in a row. It's just not my life anymore. I want to be home with the kids." She added that her family has received death threats.

Run-ins with the law: Snooki has had some minor run-ins with the law. On July 30, 2010, in Seaside Heights, New Jersey, Polizzi was cited for disturbing the peace, disorderly conduct, and criminal annoyance of others. After entering a plea bargain, the charges were dropped and she was socked with a $500 fine and community service. Then on May 31, 2011, in Florence, Italy, Polizzi was cited and released after the car she was driving collided with a parked traffic police car. Two police officers sustained minor injuries.

Jionni doesn't like the spotlight and prefers to let his wife shine while he stays more in the background. The two met at Karma nightclub in 2010 while Snooki was filming season three of "Jersey Shore." She was so drunk she could not remember his name and called him Bernard. Nonetheless, the two quickly became hot and heavy and by March 2012 the couple was engaged and expecting their first child.

In October 2016, Snooki announced she had had a breast augmentation to obtain a C cup.

In July 2020, Snooki announced her new line of baby gear called MAWMA coming to Buy Buy Baby stores. The line will include high chairs, strollers, travel systems, and diaper bags. Snooki showed off some samples of her strollers in an Instagram video. She said: "I'm super excited about my future MAWMA brand coming to Buy Buy Baby soon. These are my 'Corinthia' strollers — one in zebra and one in leopard. I love the leopard because it has rose gold detail. It has a little blush and olive in the leopard. You can put your alcohol and phone in there for when you go and walk the baby."  Many fans commented positively on the chic strollers while others noted the absence of a cup holder and had HUGE issues with that.

While shooting in Seaside Heights, Snooki was punched in the face by New York City school gym teacher Brad Ferro. Videos of the punch went viral on YouTube and were featured in many news media. After the punch was made public, Snooki's appearance fees increased from $2,000 per event to $10,000 per event.

Real Estate: In 2015, Snooki and her husband purchased a three-story colonial home in Florham Park, New Jersey for $2.6 million. 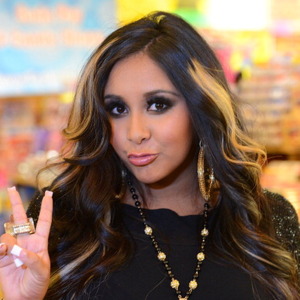