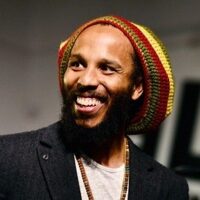 Ziggy Marley net worth: Ziggy Marley is a Jamaican musician who has a net worth of $10 million dollars. Ziggy Marley was born David Nesta Marley in Kingston, Jamaica in October 1968. He is the son of legendary reggae musician Bob Marley. Ziggy and his siblings recorded with their father on the 1979 album Children Playing in the Streets. They later became known as the Melody Makers and played at their father's funeral in 1981. The group's label EMI wanted Ziggy to become a solo act and they decided to move to Virgin Records. The Melody Makers recorded 10 studio albums and their single "Tomorrow People" charted in seven countries. The group also won three Grammy Awards for Best Reggae Album. Ziggy has been active in politics and created the record label Ghetto Youths Crew. He released his solo album Dragonfly in 2003. His 2006 album Love Is My Religion won him another Grammy Award for Best Reggae Album. His 2009 album Family Time features Paul Simon, Willie Nelson, and Jack Johnson. It won the Grammy Award for best Musical Album for Children. His other popular songs include "True to Myself", "Drive", and "People Get Ready". His wife Orly Agai is the former vice-president of William Morris Agency. He has six children including the reggae and rap artist Daniel "Bambaata" Marley. He continues to release solo albums including 2018's "Rebellion Rises"