Wisin y Yandel net worth: Wisin y Yandel is a Puerto Rican reggaeton due who have a net worth of $40 million. The duo consists of Juan Luis Morera Luna (Wisin) and Llandel Veguilla Malave (Yandel). They started off in 1998 and contributed to a compilation album. Their debut album Los Reyes del Nuevo Mileno was released in 2000.

They have released 11 studio albums. The duo has had six albums hit #1 on the U.S. Latin charts. Their 2005 release Pa'l Mundo was certified 4x Platinum and sold a million copies worldwide. Their 200 release Wilson vs. Yandel: Los Extraterrestres also sold a million copies and was certified 3x Platinum. Their most popular songs include "Mayor Que Yo", "Rakata", "Llame Pa' Verte (Bailando Sexy)", "Pam Pam", "Pegao", "Sexy Movimiento", "Ahora Es", "Siguelo", "Me Estas Tentando", "Abusadora", "Gracias a Ti", "Tu Olor", "Follow the Leader", and "Algo Me Gusta De Ti". The duo launched a clothing line in 2011 with Marc Ecko. They have worked with Daddy Yankee, R. Kelly, Enrique Iglesias, Ricky Martin, 50 Cent, T-Pain, Nelly Furtado, Jennifer Lopez, and Chris Brown. In 2002 they won the Tu Musica Award for Best Rap/Reggaeton Duo and in 2009 they won the Latin American MTV Award for Artist of the Year. 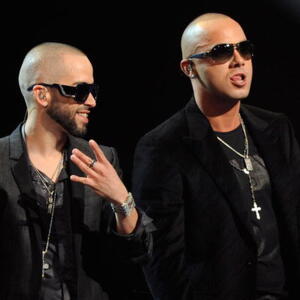