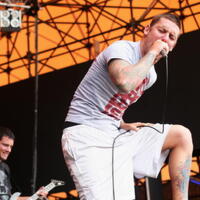 Winston McCall net worth: Winston McCall is an Australian singer-songwriter who has a net worth of $1 million. Winston McCall was born in Byron Bay, New South Wales in September 1981. He is the lead singer of the metal core band Parkway Drive and the hardcore punk band Rain Dogs. McCall formed Parkway Drive in 2002. Their debut studio album Killing with a Smile was released in 2005 and their second album Horizons in 2007 reached #6 in Australia. Parkway Drive had more success with their third studio album Deep Blue in 2010. The album was certified Gold in Australia and reached #2 on the charts. Their fourth album Atlas in 2012 was also certified Gold in Australia and reached #3. McCall's other band Rain Dogs released a demo album in 2013. McCall has provided guest vocals on The Warriors' album See How You Are in 2011. His younger brother Oscar McCall is the lead singer of the band 50 Lions.