Like many pop stars, Camargo is not only a singer but also a dancer and actress and her concerts tend to be highly choreographed. As a celebrity, she's regularly featured on Brazilian television, but she's also proven herself an accomplished actress, notably appearing as the character Diana on over two dozen episodes of the long-running TV series Sítio do Pica-Pau Amarelo. Her image is used to market numerous products in Brazil, particularly those targeted toward teenage girls. She's a spokesperson for SOS Mata Atlântica, a non-governmental organization dedicated to preserving the Atlantic Forest. This effort was acknowledged by Nickelodeon, when they honored her with their 2007 Pro-Social Award. Camargo released her debut album in 2000, which spawned a trio of major hits: O Amor Não Deixa, Apaixonada por Você and Eu Posso Te Sentir. Two of the three hits (O Amor Não Deixa and Apaixonada por Você) were chart-toppers, hitting number one on the Hot 100 Brazil singles chart and the latter of the three was a Top Ten hit, reaching number nine. Apaixonada por Você was chosen to be the theme song of the Brazilian telenovela Um Anjo Caiu do Céu, further helping drive sales of the new pop star's self-titled debut. Camargo's style of music varies, often touching on dance, rock, country and forró, but is always slickly produced and basically rooted in pop. She relies heavily on music videos to accentuate her music and is appropriately an MTV favorite. 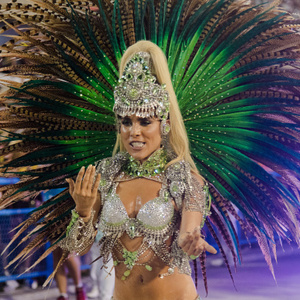