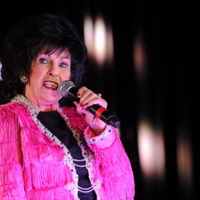 Wanda Jackson Net Worth: Wanda Jackson is an American singer, songwriter, guitarist, and pianist who has a net worth of $10 million. Wanda Jackson was born in Maud, Oklahoma in October 1937. Jackson has been called the Queen or First Lady of Rockabilly. She has success in the 1950s and 1960s as one of the first female rockabilly singers and has been credited as a pioneering rock and roll artist. She was known for mixing country music with rockabilly and transitioned to focus on mainstream country music when rockabilly declined in popularity. Her self-titled debut studio album was released in 1958 on Capitol Records. Jackson released a total of 45 studio albums. She recorded Top 10 hits with "You Can't Have My Love", "Right or Wrong", "In the Middle of a Heartache", and "Santo Domingo". Some of her other hits included "Tears Will Be the Chaser for Your Wine", "A Woman Lives for Love", and "Fancy Satin Pillows". In 2009 Wanda Jackson was inducted into the Rock and Roll Hall of Fame as an Early Influence. She was also inducted into the Rockabilly Hall of Fame and given the Americana Lifetime Achievement Award.