Vitas net worth: Vitas is a Russian singer and songwriter who has a net worth of $20 million. Vitas was born in Daugavpils, Latvian SSR, Soviet Union in February 1979. He also plays the accordion and incorporates styles including pop, techno, new-age, easy listening, classical, jazz, and folk in his music. Vitas is known for designing his own stage costumes and has been popular on Russian television and in Asian markets. Vitas released his debut studio album Philosophy of Miracle in 2001. He has also released the albums Smile! in 2002, Mama in 2003, the Songs of My Mother in 2003, A Kiss as Long as Eternity in 2004, Return Home in 2006, Crane's Cry, Return Home Part 2 in 2007, 20th Century Hits in 2008, Audio Visual Connect Series in 2008, Say You Love in 2009, Masterpieces of Three Centuries in 2010, Romances in 2011, Mommy and Son in 2011, Only You. My Love Story, Part I in 2013, and I'll Give You the Whole World. My Love Story, Part II in 2014. His most popular song is "Opera #2" which was released in 2000. 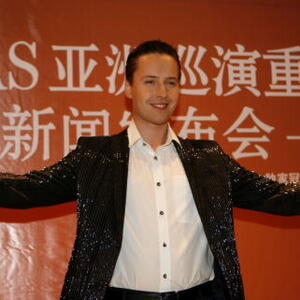