Vince Gill net worth: Vince Gill is an American country musician who has a net worth of $30 million. Born in Norman, Oklahoma, Vince Gill began studying and playing multiple instruments at the encouragement of his mother and father. He played in various bluegrass groups throughout his high school years and after graduating began to perform more high profile gigs.

In the late 70s, he began performing with Pure Prairie League, a group that he had once opened for while in high school. He sang lead on their hit song "Let Me Love You Tonight". In the 80s, he began to perform as a solo artist, and has gone on to record twenty successful studio albums. During his career, Vince Gill has sold more than 25 million albums worldwide, and has won 20 Grammy Awards and 18 Country Music Association Awards during his career. He was inducted into the Country Music Hall of Fame in 2007, and released the album, "Guitar Slinger" in October of 2011. Vince has been married to fellow country music singer Amy Grant since 2000. 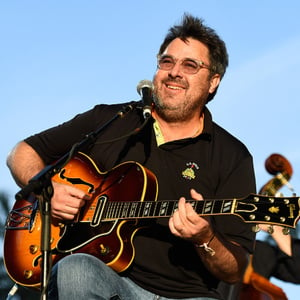