What was Vicente Fernandez's net worth?

Vicente Fernandez was a Mexican actor, singer and producer who had a net worth of $25 million at the time of his death. Vicente Fernandez died on December 12, 2021 at the age of 81. Vicente Fernández recorded over 80 albums and appeared in more than 30 films. Across his career, he won nine Latin Grammy Awards, 14 Lo Nuestro Awards, and three Grammy Awards. Fernández is one of the best-selling Mexican recording artists in history, having sold more than 50 million albums globally.

Vicente Fernández was born on February 17, 1940 in Guadalajara, Jalisco, Mexico to a rancher and a housewife. Growing up, he dreamed of being an actor, and also developed a passion for music when he was gifted with a guitar. After he finished elementary school, Fernández moved with his family to Tijuana, where he worked as a painter, bricklayer, and cabinetmaker as a teen. Following this, he worked as a cashier at his uncle's restaurant, and began singing in restaurants and at weddings. Fernández joined a number of mariachi bands during this time.

At the age of 21, Fernández made his first paid television appearance on the show "La Calandria Musical." In 1965, he moved to Mexico City to pursue a career in music. His first contract was with CBS México, for which he recorded the albums "Soy de Abajo," "Ni en Defensa Propia," and "Palabra de Rey." Fernández subsequently recorded "La Voz Que Estabas Esperando" and the hit albums "El Rey," "El Hijo del Pueblo," and "Para Recordar."

Fernández achieved international recognition in 1978, when his cover of the Fernando Z. Maldonado song "Volver Volver" became a smash hit throughout the Americas. Later, in 1983, he had his first album to sell over one million copies with "15 Grandes Con el Numero Uno." Four years later, Fernández embarked on his first tour in South America when he traveled to Colombia and Bolivia.

In the 90s, Fernández became known in the United States as the "Mexican Sinatra." During this time, he released a number of popular ranchera albums such as "Lástima Que Seas Ajena," "Aunque Me Duela el Alma," and "La Mentira." Across the decade, Fernández earned five Grammy Award nominations. 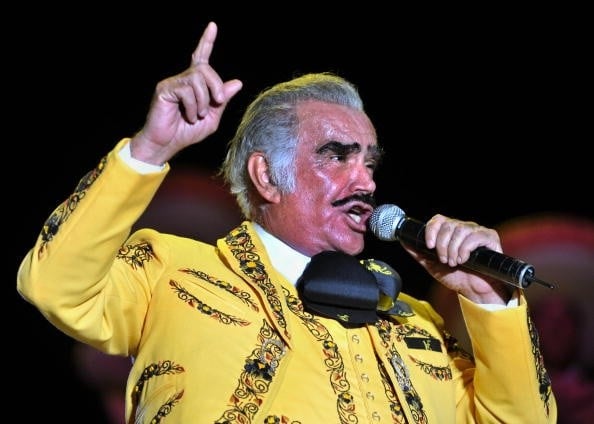 In April of 2016, Fernández held a farewell concert at the Estadio Azteca in front of over 80,000 people. It was the biggest concert of his professional career, as he performed upwards of 40 songs for a duration of over four hours. The concert was recorded as the album "Un Azteca En El Azteca, Vol. 1 (En Vivo)," which won the Grammy Award for Best Regional Mexican Music Album in 2017.

As an actor, Fernández made his debut in the 1971 film "Tacos al Carbón." In 1976, he had his first starring role in "La Ley del Monte." Over the course of his career, Fernández starred in 30 films, 18 of which were directed by Rafael Villaseñor Kuri. He mostly played the stereotypical "macho" Mexican man on screen. Among his notable credits are "Por tu Maldito Amor," "El Hijo del Pueblo," and 1991's "Mi Querido Viejo," his final film.

Fernández often stirred controversy in his advanced years. In 2019, he said he refused a liver transplant on the grounds that the liver could have belonged to a "homosexual or drug user." A couple years later, he provoked outrage when he put his hand on a fan's breast while taking a picture. Fernández was also accused of sexual assault by the singer Lupita Castro, who alleged that he had abused her some 40 years ago, but kept quiet due to fears of reprisal.

In 1963, Fernández wed Maria del Refugio Abarca Villaseñor. Their son, Vicente Jr., was born premature and consequently had to be incubated. The couple also had sons named Alejandro and Gerardo, as well as an adopted daughter named Alejandra. Fernández performed with Alejandro and Vicente Jr. on many occasions. In 1998, Vicente Jr. was kidnapped by an organized crime group and was held as ransom; he had his finger amputated as a warning. Fernández allegedly paid a large sum of money to have him released.

Fernández struggled with health issues later in his life. He had prostate cancer, which he beat in 2002, and later overcame liver cancer. However, he chose to refuse a liver transplant. In 2013, Fernández suffered a thrombosis that caused him to briefly lose his voice, and in 2015 had surgery to remove abdominal hernias. In 2021, he was admitted to the hospital after falling at his ranch, causing injuries to his cervical spine; he was also diagnosed with Guillain-Barré syndrome. Fernández's condition fluctuated over the year, until it worsened again due to a bout of pneumonia. He passed away on December 12 at the age of 81. 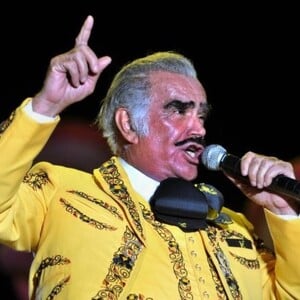