Vera Lynn Net Worth: Dame Vera Lynn was an English singer, songwriter, and actress who had a net worth of $20 million at the time of her death in June 2020. Dame Very Lynn died on June 18, 2020 at the age of 103. During her life she sold millions of records. She sold over a million records before she was 22. She was the oldest artist to get a top 40 album in the United Kingdom. Her singing provided much needed comfort in England during World War II's darkest hours.

Vera Lynn was born in East Ham, London, England in March 1917. Her musical performances and recordings were very popular during the Second World War. During that time she gave outdoor concerts for troops in Egypt, Burma, and India. As an actress she starred in the movies Rhythm Serenade and We'll Meet Again in 1943 and One Exciting Night in 1944. She later appeared in the TV movies Gala 65 and Ave Maria and in the TV series Whack-O!.

Her most popular songs include "We'll Meet Again", "A Nightingale Sang in Berkeley Square", "The White Cliffs of Dover", and "There'll Always Be an England". After the war Lynn had hits with "Auf Wiederseh'n Sweetheart" and "My Son, My Son". In 2009 Lynn's compilation album We'll Meet Again: The Very Best of Vera Lynn was released on Decca Records. It reached #1 in the UK and Lynn became the oldest living artist to make it to #1 on the British album chart at 92. She has been named Officer of the Most Excellent Order of the British Empire, Dame Commander of the most Excellent Order of the British Empire, and Officer of the Most Venerable Order of the Hospital of Saint John of Jerusalem. She was one of 200 public figures to sign a letter to The Guardian in August 2014 opposing Scottish independence. 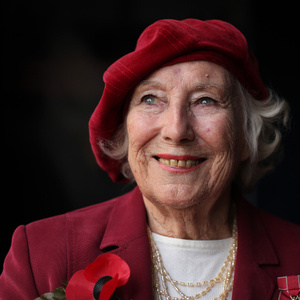