Vanessa Carlton Net Worth: Vanessa Carlton is an American musician and singer-songwriter who has a net worth of $10 million. She is probably best known for her debut single, "A Thousand Miles." After this success, Carlton has continued to release albums throughout the rest of her career. Carlton is also closely involved with charity work.

Early Life: Vanessa Lee Carlton was born on August 16th of 1980 in Milford, Pennsylvania. Raised alongside two younger siblings, Vanessa became obsessed with music at a young age. When she was just two, she learned how to play "It's a Small World" on the piano. Her mother started to personally teach her musical principles from this point onward.

At the age of nine, she developed a new passion: ballet. At the age of 14, she enrolled at the School of American Ballet. When she completed her ballet education, she gravitated back towards music and started to perform at local nightclubs and bars. During this period, she started to become comfortable with performing on stage. However, she developed an eating disorder after leaving high school for which she received treatment. She overcame the disorder before releasing her first single.

Career: In 2001, she signed a record deal with A&M Records. She also started collaborating with a songwriter and producer called Peter Zizzo, who helped her record her first demo tape. The tape subsequently attracted the attention of producer Jimmy Iovine, who signed her to another deal. Carlton then began work on her debut album. Although it was initially supposed to be released with the title "Rinse," the project was eventually abandoned. Only a few songs survived and made into her real debut album, "Be Not Nobody."

Although Carlton was discouraged by the failure of her first attempt at a solo album, she continued to record various tracks, including an early demo for the song "A Thousand Miles." Eventually, A&M president Ron Flair heard the demo track and immediately started organizing recording sessions to get the song produced. He even produced and arranged the song himself.

As Flair predicted, the song became a major hit. It debuted in the top five on the charts and earned Vanessa several Grammy Award nominations. Flair then produced the rest of the album, which was released in 2002. "Be Not Nobody" charted well and sold more than 2 million copies worldwide. It also contained singles like "Ordinary Day" and "Pretty Baby." In response to her newfound fame, Vanessa Carlton began touring the United States and Europe to support her debut album.

After collaborating with a number of other artists, Carlton released her second album, "Harmonium" in 2004. Unfortunately, the album didn't perform anywhere near as well as her debut with disappointing sales numbers and low-charting singles. The album was much darker than her previous music, and it was produced by Third Eye Blind member Stephan Jenkins. During this period, Vanessa was also in a relationship with Jenkins. Because of the failure of "Harmonium," Carlton's record label began to question her decisions.

Nevertheless, she toured throughout North America to support the album before leaving the record label in 2005. She spent the next period collaborating with a number of different artists before beginning work on another album. She continued to work with Stephan Jenkins, even though they had broken up by this point. In 2007, Vanessa released "Heroes and Thieves," a third album that contained hits such as "Nolita Fairytale." This time, the album performed better on the charts and received positive reviews.

After signing a new deal with the record label Razor & Tie, Vanessa released another album entitled "Rabbits on the Run." The album exuded a kind of dreamy, fantastical tone exaggerated by the straight-to-tape recording process, and it contained singles such as "Carousel." Another trippy and playful album came next in 2015 with the release of "Liberman." After this release, Carlton followed up with a number of live albums.

In 2017, Vanessa released the song "Love is an Art" and suggested that it may appear on the next album. Later, she confirmed on social media that she was going to begin work on her next album in 2019. Throughout 2018, Carlton released a number of covers for songs like "Dreams" by Fleetwood Mac, "Only Love Can Break Your Heart" by Neil Young, and "Needle in the Hay" by Elliot Smith. In total, she recorded six cover songs that were released as part of a triple vinyl collection.

In 2019, it was announced that Vanessa Carlton would make her Broadway debut in the musical "Beautiful." She played the lead role for a limited run and received positive reviews despite having very little theater experience. In 2020, she released her sixth album, which is entitled "Love is an Art."

Relationships: In 2010, Vanessa Carlton came out as a bisexual. After starting a relationship with musician John McCauley, she became pregnant but suffered complications. In 2013, McCauley and Carlton were married, and in 2015 they welcomed their first child into the world.

Activism: Shortly after releasing the album "Heroes and Thieves," Carlton contributed the song "More than This" to the "Songs for Tibet," an album created by many artists to support Tibet in the face of human rights violations within its nation. During this period, she also joined several artists and musicians on a trip to the Arctic Circle to learn more about climate change. Carlton participates with PETA for various initiatives. In 2005, she completed the New York City Marathon and donated her pledge money to Musicians on Call, a nonprofit organization that helps hospital patients hear live music. 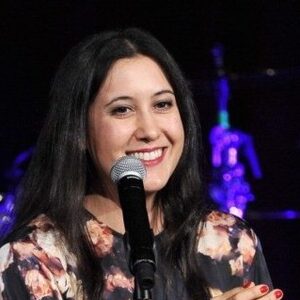