What is Tyler Joseph's Net Worth?

Tyler Joseph is an American singer, songwriter, and musician who has a net worth of $16 million. He is best known for being the lead singer and pianist of the band Twenty One Pilots. The band got together in Columbus, Ohio in 2009.

Tyler Joseph was born on December 1, 1988 in Columbus, Ohio. Tyler and his siblings Zack, Jay, and Madison are the children of Kelly Joseph, a math teacher, and Christopher Anthony "Chris" Joseph, a basketball coach at a local high school. All three children were homeschooled by their parents.

Joseph's first exposure to music was through listening to the Christian band DC Talk. He played varsity basketball with future Twenty One Pilots bassist Nick Thomas. Joseph started a YouTube channel in 2007 called "slushieguys" which gained over 126,000 subscribers by August 2021. He rejected an offer to play basketball on scholarship at Otterbein University. It was around this time that he began showing interest in playing music and entertaining.

Twenty One Pilots were signed by Fueled by Ramen records in 2012. Their major-label debut album Vessel was released in 2013 and reached #10 on the US Alternative chart. The band subsequently went on a nationwide tour ("Quiet is Violent World Tour")  to support the album.

The band's 2015 album Blurryface reached #1 in May of that year on the Billboard 200, US Alternative, and US Rock charts. Their singles include "Holding on to You", "Guns for Hands", "Lovely", "House of Gold", "Car Radio", "Fairly Local", "Tear in My Heart", "Stressed Out", "Lane Boy", and "Ride". Twenty One Pilots were nominated for an MTV Video Music Award – Artist to Watch in 2013. Joseph and Dun then embarked on two international tours in 2015 and 2016. 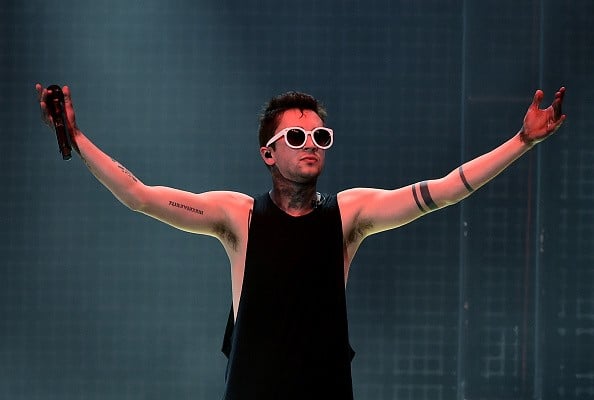 On February 12, 2017 Josh Dun and Tyler Joseph won a Grammy for Best Pop Duo/Group Performance. The duo accepted the award in their underwear and told the crowd that this was a promise they had made years earlier if they ever won a Grammy. The band released their fifth studio album, "Trench" in October 2018 and toured in support of the album that fall. The music video for their new single "Chlorine" directed by Mark C. Eshleman was uploaded to YouTube on January 22, 2019. In April 2020, Twenty One Pilots released a single called "Level of Concern," which reflected the anxiety during the early days of the COVID-19 pandemic. The music video for the song was filmed in the homes of Joseph and Dun while they were in lockdown. The band donated some of the proceeds of the song to the charity Crew Nation, which benefited live music crews who could not work / be paid during the international lockdown.

Twenty One Pilots released a Christmas song called "Christmas Saves the Year," heavily inspired by Mellotron instrument, during a Twitch live stream on December 8, 2020. On May 21, 2021, a month after the release of the lead single from the album "Shy Away," Twenty One Pilots released their sixth studio album titled "Scaled and Icy." The other two singles from the album were "Choker" and "Saturday."

Outside of success with Twenty One Pilots, Joseph released a solo album titled "No Phun Intended." He recorded it in his basement over the course of his senior year of high school. It was available for streaming on his PureVolume until the music service shut down in 2018. Joseph worked with rapper Joseph Michael Langstone (otherwise known as his stage name Jocef) on the song "Live" in 2010, a track which he also co-wrote.

In 2011, Joseph played the lead role in the mockumentary "The (moderately inspiring tale of the) Longboard Rodeo Tango." Joseph was featured in "Where Are You?", an internet use awareness video in 2012. Joseph participated at the Five14 Church's Christmas with the Stars show in New Albany, Ohio, in December 2013. He has also contributed tracks for the Five14 Church's worship album "Clear." In 214, Tyler lent his backing vocals to Dallon Weekes's (bassist of Panic at the Disco) song "Sickly Sweet Holidays."

Joseph became engaged to Jenna Black in July 2014. They married in March 2015. Joseph and Black announced they were expecting their first child in September 2019, and their daughter Rosie Robert Joseph was born in February 2020. During a performance at the MTV VMA's on September 12, 2021, Joseph announced that he and his wife were expecting another child.