Ty Herndon net worth: Ty Herndon is an American country music singer who has a net worth of $8 million. Ty Herndon was born in Meridian, Mississippi in May 1962. Ty started playing the piano and singing Gospel music as a teenager and moved to Nashville, Tennessee to pursue his music career. He later moved to Texas where he gained a following on the honkytonk circuit and won Texas Entertainer of the Year in 1993 and was signed to Epic Records. His debut album What Mattered Most was released in 1995 and was certified Gold in the US. The album reached #9 on the US Country chart, #68 on the Billboard 200, and #3 on the Canadian country chart. It contained the #1 country song in the US and Canada "What Mattered Most". Herndon's 1996 album Living in a Moment was also certified Gold in the US and contained the #1 country song in the US and Canada "Living in a Moment". Herndon has released a total of seven studio albums and also had a #1 US country hit with "It Must Be Love" in 1998. He was nominated for a Grammy Award in 2010 and won a Dove Award the same year. Herndon came out as a gay man in People magazine in November 2014. 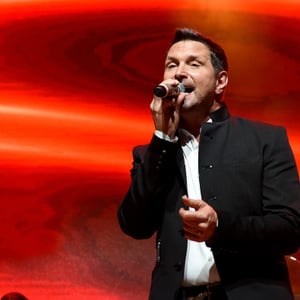