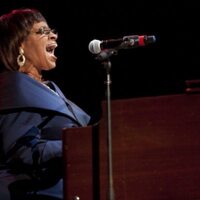 Twinkie Clark net worth: Twinkie Clark is an American gospel singer, musician, composer, and evangelist who has a net worth of $6 million. She is best known as a member of the gospel group The Clark Sisters and is frequently referred to as "the mother of contemporary Gospel  Music".

Twinkie Clark was born in Detroit, Michigan in November 1954. She is best known for being a member of The Clark Sisters. Clark is a member of the Hammond organ Hall of Fame and also plays the piano. The Clark Sisters have been credited with bringing gospel music to the mainstream. They have released 16 albums and have sold millions of copies making them the highest-selling female gospel group of all-time. The Clark Sisters have also won two Grammy Awards and had #1 hits on the Gospel charts with the songs "Is My Living in Vain", "Time Out", and "Blessed & Highly Favored". Clark has gone on to release several solo albums.