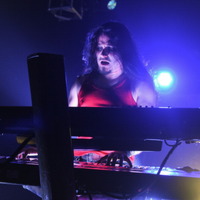 Tuomas Holopainen Net Worth: Tuomas Holopainen is a Finnish songwriter, musician, screenwriter, and record producer who has a net worth of $10 million. Tuomas Holopainen was born in Kitee, Finland in December 1976. He is best known as being the leader, founder, songwriter, and keyboardist for the metal band Nightwish. He started playing piano at seven and studied tenor saxophone and clarinet. He joined his first bands in 1993 and played with Darkwoods My Betrothed, Dismal Silence, Sethian, and Nattvindens Grat. Nightwish was formed in 1996 and their debut album Angels Fall First was released in 1997. They released the albums Oceanborn in 1998, Wishmaster in 2000, and Century Child in 2002. Their 2004 release Once sold over a million copies and helped the band breakthrough in the United States. Their single "Wish I Had an Angel" received airplay on MTV in 2004 and was featured on three film soundtracks in the U.S. Their 2007 album Dark Passion Play has sold almost two million copies and their single "Amaranth" became successful in Europe. Nightwish is the most successful Finnish band and has sold over eight million records worldwide and earned over 60 gold and platinum awards and has had five #1 albums and 13 #1 singles. In 2014 Holopainen released his debut solo studio album Music Inspired by the Life and Times of Scrooge.