Trisha Paytas net worth: Trisha Paytas is an American media personality, actress, recording artist, and entrepreneur who has a net worth of $10 million. Trisha Paytas was born in Riverside, California in May 1988. At one point she worked as a stripper and an extra in film and TV productions. In 2006 she was a correspondent for the television series The Greg Behredent Show and in 2007 she was featured on the reality TV series Who Wants to Be a Superhero?. In 2010 she had a recurring role on the television series The Ultimate Man.

Paytas has appeared in several music videos including for artists like Amy Winehouse and Eminem. She created her YouTube channel blndsundoll4mj in 2006. Today the channel has more than 5 million subscribers and 2 billion views.

She has released a number albums including Fat Chicks, Superficial Bitch, Under the Covers, Daddy Issues, Showtime, Warrior, and Chicken Fingers and Lipo.

Trisha is the co-host of the "Frenemies" podcast with Ethan Klein.

Trisha is reportedly one of the highest-paid people on the adult subscription platform OnlyFans. It has been reported that she earns as much $1 million per month from the platform. 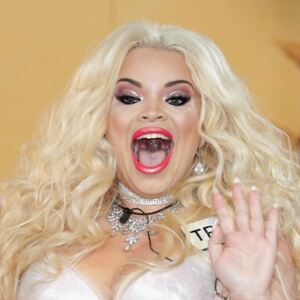