Tricky Net Worth: Tricky is an English musician and actor who has a net worth of $4 million. Born as Adrian Nicholas Matthews Thaws in January of 1968, he is better known by his stage name, Tricky. He is best known for his work in the English music industry, for which he has created a dark, layered sound known as sprechgesang.

He is also known to blend various styles as music, especially rock and hip hop, as well as high art and pop culture. He received acclaim for his first album, 1995's Maxinguaye, which received a Mercury Prize. It was also named Album of the Year by NME Magazine. He has since gone on to record and release eight more albums, all of which have been considered as commercial successes. Tricky's personal life has been the subject of much public scrutiny. In the early 90s he dated Bjork, which he spoke about publicly in 2013. Tricky has two daughters, Mazy, who he had with fellow musician Martina Topley-Bird. His other daughter is with an unknown woman. On his father's side, Tricky has 14 siblings. He was briefly married in 1998 to Carmen Ejogo. The married, which took place in Las Vegas, was short lived. 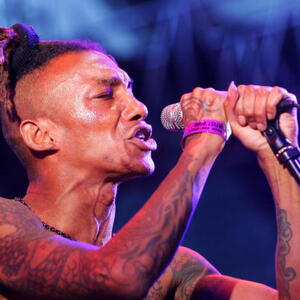