Travie McCoy net worth: Travie McCoy is an American singer and rapper who has a net worth of $9 million. Travis Lazarus McCoy was born in Geneva, New York in August 1981. He worked in a tattoo parlor at 15 and started tattooing his friends. In high school he played drums and created a rap group with his father and brother.

He formed the band Gym Class Heroes in 1997. He opened an art show and lived off the money he made from selling paintings. He won an MC battle on MTV's Direct Effect in 2002. Gym Class Heroes signed to Fueled by Ramen and Decaydance Records and released the album As Cruel as School Children. They have had hits with "Cupid's Chokehold", "Clothes Off!!", and "Cookie Jar". The band has frequently collaborated with Patrick Stump from Fall Out Boy. Gym Class Heroes took a three year hiatus but have released five studio albums. They won an MTV Video Music Award for Best New Artist in 2007. McCoy started his solo career in 2010 and officially started going by Travie instead of Travis. His solo album Lazarus was released in 2010 and he is scheduled to release another album sometime in 2014. He has been open about his battle with opioids. He was arrested in 2010 for tagging the Berlin Wall. He dated singer Katy Perry for two years and is the cousin of rapper Tyga. 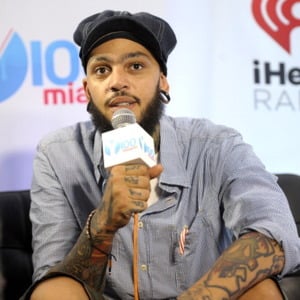