How much is Tracy Chapman Worth?

Tracy Chapman Net Worth: Tracy Chapman is an American singer, songwriter, and activist who has a net worth of $6 million. She is known for singles including "Fast Car," "Talkin' 'bout A Revolution," and "Give Me One Reason."

Early Life: Tracy Chapman was born on March 30th, 1964 in Cleveland, Ohio. Her parents divorced when she was only four years old, and she was raised by her mother. She was musically inclined from a young age, and despite not having much money, her mother bought her a ukulele when she was three years old. When she was eight, she began playing the guitar and writing songs, and by sixth grade, she had also learned how to play the clarinet. Chapman grew up as an African American during the desegregating of public schools, which led to civil unrest and racial intolerance. She was raised on welfare and experienced bullying, racially motivated-assaults, and ostracization at school. She was accepted into an experimental educational program called A Better Chance. It began in the 1960s and was designed to help lower-income and underserviced children receive better educations at private institutions with their tuition fully paid. She left Cleveland and moved to Danbury, Connecticut where she attended the Wooster School. Although she was raised as a Baptist, the Wooster School is affiliated with the Episcopalian Church. In addition to being active in the school's music department, she played soccer, and during her first year there, her friends helped raise funds to purchase her a better guitar. After graduating, she attended Tufts University where she intended on studying to become a veterinarian but switched her major to anthropology.

Musical Beginnings: While attending Tufts, Chapman still made time to perform in public, and she often wrote songs about social issues. Brian Koppelman, whose father ran the independent music publishing company SBK, went to see her perform after being told about the nature of her lyrics and musical talent. He told his father about her, and after he saw her perform, he spent six months convincing her to sign a record deal with Elektra Records. In 1988, she released her debut self-titled album "Tracy Chapman," and it was critically acclaimed. It peaked at no. 1 on the Billboard album charts, and within two weeks, it had sold over a million copies. The single "Fast Car" was the most successful from the album, which peaked at no. 6 on the charts, but the singles "Talkin' 'bout A Revolution" and "Baby Can I Hold You" both charted. She was nominated for seven Grammy Awards and won three. It remains one of the best-selling albums of all time. Her 1989 album "Crossroads" was not as big of a commercial or critical success as her first album, but it nevertheless peaked at no. 9 on the Billboard album chart. Her tone on this album was darker, with more socially aware and politically charged lyrics. Chapman acted in a new capacity on her second album as a co-producer.

She released her third album "Matters of the Heart" in 1992, and it was met with mixed reviews from critics, peaking at no. 53 on the Billboard album chart. Her 1995 album "New Beginning" brought her back to the level of success she saw after her debut. It peaked at no. 4 on the Billboard album chart and has been certified platinum five times over. The single "Give Me One Reason" peaked at no. 3 on the Billboard Hot 100 and won her a Grammy for Best Rock Song and nominations in three other categories. She had performed the song on "Saturday Night Live" six years prior to its release on the album. She received some criticisms for her use of the digeridoo in the album's title track. Aboriginal women are forbidden from playing the digeridoo, but Chapman attended the Digeridoo University to learn the instrument and so was able to make informed decisions regarding cultural decorum. After the release of "New Beginning," she took a five-year hiatus from recording.

Post 2000s Career: She came back in 2000 with the album "Telling Stories." It was well-received among critics and charted at no. 33 on the Billboard album charts. The title track was released as a single, which received widespread airplay in both the US and Europe. She embarked on a short five-month tour to promote the album. In 2001, she released a greatest hits album titled "Collections," and she released her next album of new material "Let It Rain" in 2002. Although it peaked at no. 22 on the Billboard Album chart, it didn't receive as much attention as her previous records. In 2005, she released her seventh studio album "Where You Live," which peaked at no. 49 on the Billboard Album chart. It spawned the singles "Change" and "America." She spent most of 2005 touring around the US, and then extended her tour into the next year to cover international locations.

Social Activism and Personal Life: Chapman has always been an activist artist, and she has remained true to that throughout her career. In 2004, she received an honorary doctorate degree in Fine Arts from her alma mater Tufts University. She has stated that she is approached by a number of organizations with their own interests and does what she can to use her platform to bring awareness to social and human rights issues. She ihas supported charities including San Francisco AIDS Foundation, and she performed at a campaign event for Bernie Sanders. She has also worked to bring more resources to underprivileged children in her hometown of Cleveland and sponsored a "Crossroads in Black History" essay contest for high schoolers in Cleveland and other cities. She has never been married and has always been very private about the details of her personal life.

In later 2020, Chapman was awarded a judgement of $450,000 for a copyright infringement lawsuit she brought against rapper Nicki Minaj. Minaj asked Chapman if she could cover her hit song "Baby Can I Hold You," but Chapman denied the request. In an October 2018 lawsuit, she claimed that Minaj still used parts of her song as inspiration the rapper's track titled "Sorry." And a judge agreed in a December 2020 ruling. 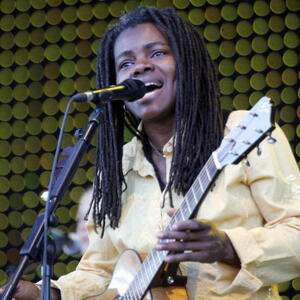