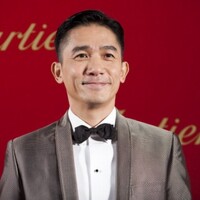 Tony Leung Net Worth: Tony Leung is a Hong Kong actor and C-pop singer who has a net worth of $20 million. Tony Leung was born in Hong Kong in June 1962. Tony met actor and comedian Stephen Chow who influenced him to become an actor. Leung studied at the TVB training courses and became host of the children's program 430 Space Shuttle. He made his acting debuts in 1982 in the film Forced Vengeance and the TV series Wut lik sap jat and Heung sing long ji. Leung also starred in the films Mad, Mad 83, Young Cops, Fascinating Affairs, The Lunatics, Love Unto Waste, You Will I Will, People's Hero, Happy Go Lucky, My Heart is that Eternal Rose, A City of Sadness, Seven Warriors, Bullet in the Heat, The Banquet, Days of Being Wild, Don't Fool Me, The Tigers, Come Fly the Dragon, The Days of Being Dumb, Hard Boiled, Butterfly and Sword, He Ain't Heavy, He's My Father, The Eagle Shooting Heroes, End of the Road, Hero – Beyond the Boundary of Time, The Magic Crane, Tom, Dick, and Hairy, Always Be the Winners, Ashes of Time, Chungking Express, The Returning, Cyclo, Happy Together, The Longest Nite, In the Mood for Love, Infernal Affairs, 2046, Confession of Pain, Lust, Caution, Red Cliff: Part 1, The Silent War, and the Grandmaster. Leung has won over 20 awards including three Golden Bauhinia Awards, three Golden Horse Awards, and seven Hong Kong Film Awards. He has also released 12 albums from 1986 to 2006. Leung is known as Little Tony to avoid confusion with the Hong Kong actor Tony Leung Ka-fai.