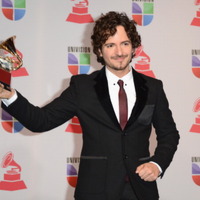 Tommy Torres Net Worth: Tommy Torres is a Puerto Rican singer, songwriter, and producer who has a net worth of $5 million. Tommy Torres was born in Santurce, San Juan, Puerto Rico in November 1971. Torres was named the #1 Hot Latin Tracks Producer in 2007 by Billboard Magazine. In 2010 he was Composer of the Year at the ASCAP's Latin Music Awards. Torres sings and plays guitar, piano, and cuatro. He has written and produced songs for artists such as Alicia Keys, Ricky Martin, Alejandro Sanz, Ricardo Arjona, and Ednita Nazario. Torres graduated from Berklee College of Music. His first composition "No Puedo Olvidar" by MDO in 1999 made it to #1 on the Billboard Hot Latin Tracks chart. His song "Llegar A Ti" by Jaci Velasquez also reached #1 and earned Torres an ASCAP Song of the Year Award. He was nominated for his first Latin Grammy Award for Ednita Nazario's "Acustico" in 2002. Torres produced Ricky Martin's MTV Unplugged in 2006. In 2001 he became a solo artist and released his debut self-titled album. The album had two Billboard Top 20 singles and was nominated for best album by a new artist on Premios Lo Nuestro. In 2009 he was a face of the Banana Republic spring and summer ad campaigns.