Tommy Steele Net Worth: Tommy Steele is an English entertainer who has a net worth of $10 million. Tommy Steele was born in Bermondsey, London, England in December 1936. Steele is regarded as being Britain's first teen idol and rock and roll star. Tommy was called the British answer to Elvis Presley.

His debut acting role came in The Tommy Steele Story in 1957. Steele went on to star in the films The Duke Wore Jeans, Tommy the Toreador, Light Up the Sky!, It's All Happening, The Happiest Millionaire, Half a Sixpence, Finain's Rainbow, Where's Jack, and Quincy's Quest. He was nominated for a Golden Globe Award in 1968 for Most Promising Newcomer – Male for The Happiest Millionaire. As a singer Steele had a #1 hit with "Singing the Blues" in 1957 and the album The Tommy Steele Story was the first by a UK group to reach #1. Steele released a total of 10 albums solo and with the Steelmen. His other hits include "Knee Deep in the Blues", Water, Water", "Where Have All the Flowers Gone?", and "Half a Sixpence". Steele had an unconfirmed meeting with Elvis Presley in Britain. 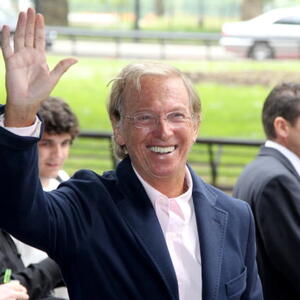