What is Tom Jones' Net Worth?

Tom Jones (officially Sir Thomas John Woodward OBE) is a Welsh singer who has a net worth of $300 million dollars. Jones is one of the most popular vocalists to emerge from the mid-1960s, selling more than 100 million records during his career. Tom has had 36 Top 40 hits in the United Kingdom and 19 in the United States. His notable songs include "It's Not Unusual," "What's New Pussycat," "Delilah," "She's a Lady," and "Green, Green Grass of Home." Tom has also appeared in several film and television projects, such as "Fantasy Island" (1984), "Fresh Prince of Bel-Air" (1993), and "Mars Attacks!" (1996), and he became a coach on talent competition "The Voice UK" in 2012. Jones received a knighthood from Queen Elizabeth II for "services to music" in 2006, seven years after he was named an Officer of the Order of the British Empire.

Tom Jones was born Thomas John Woodward on June 7, 1940, in Glamorgan, South Wales. He grew up with mother Freda, father Thomas (a coal miner), and sister Sheila and began singing at weddings and family gatherings at a young age. Tom studied at Wood Road Infants School, Wood Road Junior School, and Pontypridd Central Secondary Modern School and sang in the choir. He was diagnosed with tuberculosis at age 12 and has said that he "spent two years in bed recovering." When he was just 16, Tom married his girlfriend, Linda Trenchard, who was pregnant with his child; he dropped out of school and worked for a glove factory and construction company in order to support Linda and their son, Mark, who was born a month after their wedding.

In 1963, Tom began singing lead for Welsh band Tommy Scott and the Senators, and the following year, the group recorded a few songs with producer Joe Meek but didn't garner much interest from record labels despite Meek's best efforts. After Gordon Mills saw the band play at the Top Hat in Cwmtillery, he became Tom's manager and convinced him to start going by "Tom Jones" after he took him to London. In 1964, Jones signed with Decca and released the single "Chills and Fever" late that year; his second single, "It's Not Unusual," was an international hit thanks to Radio Caroline (a pirate radio station), reaching #1 on the U.K. charts and #10 on the U.S. charts in 1965. That year, Jones also recorded the theme songs for "What's New Pussycat?" and "Thunderball." In 1966, Tom was honored with a Grammy for Best New Artist and released "Green, Green Grass of Home," which hit #1 on the U.K. charts. In the 1960s, had several more hits, such as "I'm Coming Home" (1967), "I'll Never Fall in Love Again" (1967), and "Delilah" (1968).

Tom's first Las Vegas performance took place at the Flamingo in 1967. While in Vegas, Jones spent time with Elvis Presley, who he had met at the Paramount film studio two years earlier; Jones and Presley became friends and remained close until Elvis' death. Until 2011, Tom spent at least one week per year performing in Vegas. In 1969, he began starring in a variety show, "This Is Tom Jones," reportedly earning $9 million during its 3-season run; the show also earned Jones a Golden Globe nomination in 1970. During the 1970s, Tom also appeared on "The Special London Bridge Special" (1972), "On Happiness Island" (1974), and the U.S. television movie "Pleasure Cove" (1979). He began recording country music in the 1980s, and nine of his singles reached the top 40 country chart in the U.S. In 1988, Tom recorded a cover of Prince's "Kiss," and the video earned him an MTV Video Music Award. In 1999, he released an album of cover duets, "Reload," which reached #1 on the U.K. charts. 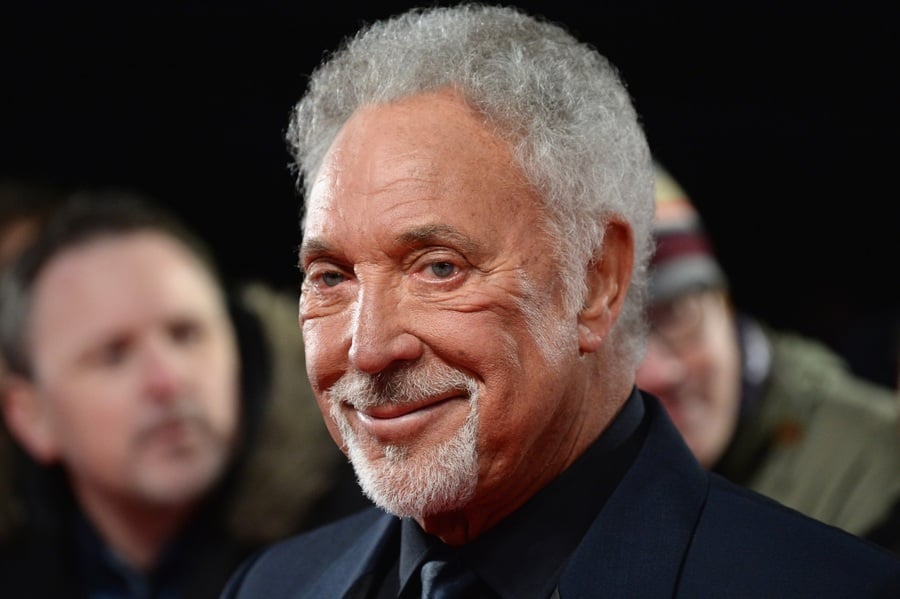 On New Year's Eve in 1999, Tom performed at Washington, D.C.'s millennium celebration at the invitation of President Bill Clinton.

He participated in the Concert for Diana, a benefit concert in honor of the late Diana, Princess of Wales, in 2007, and the Help for Heroes charity concert in 2010. In 2012, Tom joined "The Voice UK" as a coach; he remained with the show through August 2015, then returned in 2017. Also in 2012, he starred in the "King of the Teds" episode of anthology TV series "Playhouse Presents" and performed at BBC Radio 2's Live in Hyde Park festival and the Queen's Diamond Jubilee Concert. During his decades-long career, Jones has released more than 40 studio albums, and he published "Over the Top and Back: The Autobiography" in 2015.

Tom married Linda Trenchard on March 2, 1957, and they welcomed son Mark on April 11th of that year. Though Jones committed infidelity several times, the couple stayed together until Linda died of cancer in 2016. Tom has said that he has slept with hundreds of groupies, and he was involved with TV host Charlotte Laws and Mary Wilson of the Supremes during his marriage. A 1987 fling with model Katherine Berkery resulted in another son for Jones, though he denied it even after a DNA test proved the child, Jonathan, was his. Tom finally admitted that Jonathan was his son in 2008 but reportedly has no relationship with him.

In 1966, Jones won a Grammy for Best New Artist, and "It's Not Unusual" was nominated for Contemporary Rock & Roll Male Vocal Performance and Contemporary Rock & Roll Single. In 1970, he won the Ivor Novello Award for International Artist of the Year and was nominated for a Golden Globe for Best Actor – Television Series Musical or Comedy for "This Is Tom Jones." Tom also received an MTV Video Music Award – Breakthrough Video for "Kiss" in 1989 and Brit Awards for Best British Male in 2000 and Outstanding Contribution to Music in 2003. He received a star on the Hollywood Walk of Fame in 1989.