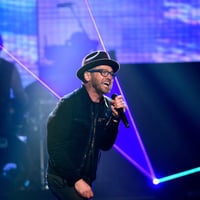 Tobymac net worth: Toby Mckeehan is an American Christian hip hop artist, singer-songwriterm producer, and author who has a net worth of $10 million. Born in Fairfax, Virginia on October 22, 1964, Mckeehan is better known to the public as TobyMac. He was first recognized for performing in the Christian group, DC Talk, and has now released five studio albums in his solo career. He has sold over ten million records between the two projects and has been associated with ForeFront Records and EMI CMG. He has had five singles stand at number one on the Christian Billboard charts, and he received a Grammy in 2013 for Best Contemporary Christian Music Album for Eye On It. Mckeehan has also co-written four books with writers Michael Tait and Kevin Max. He has written a fifth book called City on Our Knees. He is currently married to his wife, Amanda, and the couple live in Franklin, Tennessee. They have five children together by the names of Truett, Moses, Marlee, Leo, and Judah.