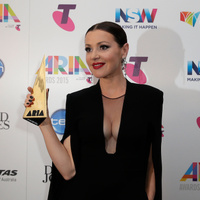 Tina Arena Net Worth: Tina Arena is an Australian singer-songwriter, actress, and record producer who has a net worth of $10 million. Tina Arena was born Filippina Lydia Arena in Keilor East, Victoria, Australia in November 1967. She is one of Australia's top selling female artists. Arena has won six ARIA Awards and World Music Awards for best-selling Australian artist in 1996 and 2000. President of the French Republic Nicolas Sarkozy awarded her the Knighthood of the Order of National Merit in 2009 for her contributions to French culture. Arena was the first Australian to receive the Order of State. In 2012 she was a judge on Australia's Young Talent Time after she became famous on the 1977 series. Arena was voted Australia's all-time greatest singer in a poll in 2012. She has released eight studio albums in English and two in French. Her 1994 album Don't Ask hit #1 in Australia and has been certified 10x Platinum. Altogether Arena has sold over 10 million albums worldwide. Her best known songs include "I Need Your Body", "Chains", "Burn", "Aller plus haut", and "Aimer jusqu'a I'impossible". Arena's autobiography Now I Can Dance was published in 2013. She has a son with partner Vincent Mancini.