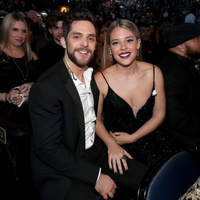 Thomas Rhett Net Worth: Thomas Rhett is an American country music singer who has a net worth of $5 million dollars. Thomas Rhett Atkins, Jr. (aka Thomas Rhett) was born March 30, 1990 in Valdosta, Georgia. He is the son of singer-songwriter Rhett Akins. Thomas Atkins has charted four singles off of his debut album It Goes Like This, the title track of which reached No. 1 on Country Airplay in late 2013. Raised on a steady diet of Merle Haggard, Hank Williams, Led Zeppelin and the Rolling Stones, Rhett landed a publishing deal with EMI just two years into his college career and managed to get a song (I Ain't Ready to Quit) on fellow country rocker Jason Aldean's 2010 album, My Kind of Party. Like Jason Aldean, Brantley Gilbert and Justin Moore, Rhett's style is a combination of slick, contemporary country and rowdy good-time rock & roll, an equation he put to the test on his 2011 debut single Something to Do with My Hands. His EP, simply called Thomas Rhett appeared early in 2013 and later that year his debut full-length, It Goes Like This, was released. In early 2012, he released his debut single, Something to Do with My Hands, followed later that year by Beer with Jesus. Both of these made Top 30 on the Hot Country Songs charts. His fourth single on his debut album, It Goes Like This, called Get Me Some of That, became Rhett's second No. 1 single in early 2014. The album's fifth single, Make Me Wanna, was released to country radio on August 4, 2014. Thomas Rhett also co-wrote the 2013 singles '1994' by Jason Aldean, 'Parking Lot Party' by Lee Brice, and 'Round Here' by Florida Georgia Line.