The Lizardman Net Worth

in Richest Celebrities › Singers
The Lizardman Net Worth:
$400 Thousand

The Lizardman net worth: The Lizardman is an American freak show and sideshow performer who has a net worth of $400 thousand. The Lizardman was born in Fort Campbell, Kentucky in June 1972. He is known for his body modifications include include his full-body tattoo of green sleeves, sharpened teeth, subdermal implants, bifurcated tongue, and green-inked lips.

He has performed for audiences across the world and has been featured on television. He performs sideshow acts including fire eating, human blockhead, sword swallowing, bed of nails, and more. He is a member of the rock band LIZARD SKYNYRD. He has set Guinness World records and been featured on Ripley's Believe It Or Not. The Lizardman has toured with bands including Disturbed and Slayer and was part of the Jim Rose Circus. The Lizardman has appeared on The Tyra Banks Show and The Daily Show and was featured in the 2005 documentary Modify. 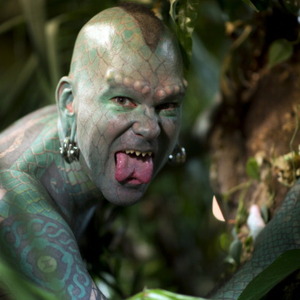