Thalía Mottola Net Worth: Thalía Mottola, also known simply as Thalía, is a Mexican singer-songwriter, entrepreneur, and actress who has a net worth of $60 million. It should be noted that a large portion of her net worth is connected to her husband Tommy Mottola, who has a net worth of $500 million. Thalía is considered by many to be the most successful Latin female star ever. Her albums have reached Gold or Platinum status in 22 countries, and to date, she has sold more than 40 million albums worldwide.

In addition to her incredibly successful music career, she has also starred in the telenovelas "Quinceañera" (1998), "Luz y Sombra" (1989), "María Mercedes" (1992), "Marimar" (1994), "María la del Barrio" (1995), and "Rosalinda" (1999). It is estimated that over two billion people, in 180 countries, have watched her television work. Thalía is also a published author, model, fashion designer, music producer, and mother of two. She began her music career performing with the children's group, Din Din, then performed with the band Timbiriche throughout the late '80s before embarking on what has become a very successful solo career in 1989. Thalía co-directed the 2017 documentary series "15: A Quinceañera Story," and she has published the books "Thalía: ¡Belleza! Lessons in Lipgloss and Happiness" (2007), "Thalía: ¡Radiante! Your Guide to a Fit and Fabulous Pregnancy" (2009), "Growing Stronger" (2011), and "Chupie: The Binky That Returned Home" (2013).

Early Life: Thalía was born Ariadna Thalía Sodi Miranda on August 26, 1971, in Mexico City, Mexico. Thalía's mother, painter Yolanda Miranda Mange, served as her manager from 1980 to 1999, and her father, Ernesto Sodi Pallares, was a writer, scientist, criminologist, and doctor of pathology. Thalía has three older sisters, Gabriela, Federica, and Ernestina, and an older half-sister, Laura Zapata, who is a singer, dancer, and telenovela actress. Thalía appeared in a TV commercial at just 1 year old, and started taking piano and ballet lessons the Conservatorio Nacional de Música at age 4. In 1976, she had an uncredited appearance in the Mexican film "La guerra de los pasteles." Ernesto, who suffered from diabetes, passed away when Thalía was 6, and she later revealed that she was so traumatized that she lost her voice for a year and was diagnosed with childhood disintegrative disorder. She studied at Lycée Franco-Mexicain elementary school and learned to speak French fluently.

Career: At age 9, Thalía joined the children's group Pac Man, which later became known as Din-Din. The band recorded four studio albums before disbanding in 1984, and later that year, Thalía was runner-up in the Juguemos a cantar music festival as a solo artist. She later played the lead in the musical "Vaselina," a children's version of "Grease," and in 1986, she joined the band Timbiriche. The following year, she made her television acting debut in an episode of the telenovela "Pobre Señorita Limantour," and in 1988, she starred on "Quinceañera," which earned her a Premios TVyNovelas award. While Thalía was a member of Timbiriche, the group released the albums "Timbiriche VII" (1987) and "Los clásicos de Timbiriche" (1989) as well as the 1988 double album "Timbiriche VIII & IX." She left the band in 1989 and later took English courses at the University of California, Los Angeles (UCLA). Before embarking on her solo career, Thalía took acting, singing, dancing, and music lessons as well. She returned to Mexico in 1990 and released her self-titled debut solo album in October of that year. The singles "Pienso en Ti," "Saliva," "Amarillo Azul," and "Un Pacto Entre los Dos" were hits, and the album was certified 2× Gold in Mexico, as was her follow-up, 1991's "Mundo De Cristal."

Thalía's third solo album, 1992's "Love," reached #15 on the "Billboard" Latin Pop Albums chart and was certified Platinum + Gold in Mexico. Her 1995 album, "En Éxtasis," was her first album to be released all over the world, and the single "Piel morena" was an international hit; the album went 2x Platinum in Mexico, the U.S., and Argentina. In 1997, the title track of her album "Amor a la Mexicana" topped the charts in 14 countries, and in 1998, she starred in the English-language film "Mambo Café," which was released in 2000. In 2001, Thalía was invited to a White House Cinco de mayo party by President George W. Bush, and she performed a medley of Mexican songs with a mariachi band. In 2003, she released her first album in English, "Thalía," which reached #11 on the "Billboard" 200 chart, and the single "I Want You" peaked at #7 on the "Billboard" Mainstream Top 40 chart. In 2007, Thalía launched "The Conexión Thalía Radio Show" on ABC Radio, and in 2008, she was featured in "People en Español" magazine's "50 Most Beautiful People" issue for the seventh time (a record).

Thalía performed at the White House in 2009 and invited President Barack Obama to dance with her. In 2010, her live album, "Primera Fila," was the top-selling album in Mexico, and she recorded a duet with Michael Bublé, "Mis Deseos/Feliz Navidad," for his album "Christmas." In 2012, Thalía performed "The Way You Look Tonight" with Tony Bennett on his "Viva Duets" album, and two years later, she released the children's album "Viva Kids Vol. 1," followed by "Viva Kids Vol. 2" in 2020. In 2015, she created a fashion line that was sold at Macy's, and in 2018, Walmart began selling Eyelure, her false eyelash and eyebrow collection. Also in 2018, Thalía produced Broadway's "Summer: The Donna Summer Musical" and released "Valiente," her 14th studio album; the single "No Me Acuerdo" went 4x Platinum in the U.S. and Mexico. In 2019, she launched Adria by Thalía, a line of hair care products, and in 2020, "People en Español" included her on their list of the 10 most influential Mexicans in the entertainment world. 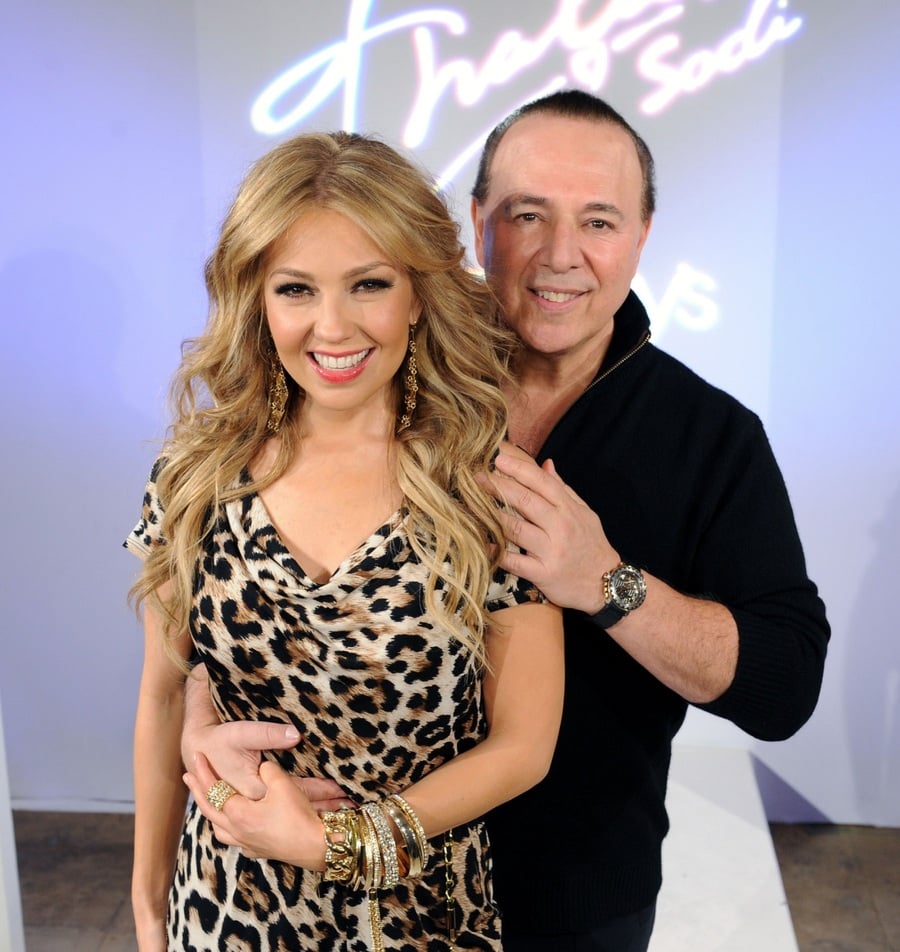 Personal Life: Thalía dated her "María la del Barrio" co-star Fernando Colunga from 1995 to 1996. She married music executive and producer Tommy Mottola (ex-husband of Mariah Carey) on December 2, 2000, and they welcomed daughter Sabrina on October 8, 2007, and son Matthew on June 24, 2011; Thalía is also stepmother to Michael and Sarah, Mottola's children from his marriage to Lisa Clark. On September 22, 2002, two of Thalía's sisters were abducted in Mexico City; Laura was released 18 days later, and Ernestina was released after 36 days. Thalía was diagnosed with Lyme disease in 2008, and in her autobiography, she wrote, "everything hurt, even my hair, which, by the way, started to fall out. At times it felt as if my head were going to burst, as if there were lead inside of it; my eyes ached in their sockets…the hypersensitivity of my skin was so severe that sometimes I couldn't even handle the bed sheets." Thalía became a U.S. citizen in 2006.

Thalía is passionate about humanitarian work, and she became a celebrity ambassador for March of Dimes in 2004 and a UNICEF Mexico Ambassador in 2016. She has been involved in the March of Dimes Prematurity Campaign and March for Babies, and she has been featured in the organization's English and Spanish promotional materials. Thalía helped raise money for the New York City Police Foundation in 2010 and assisted Mexican immigrants who were victims of Hurricane Sandy in 2012. She's a member of the nonprofit organization ALAS Foundation, which is dedicated to comprehensive Early Childhood Development programs in Latin America, and the Lyme Research Alliance honored her with the "Your Voice Inspires Many" award in 2013.

Awards and Nominations: Thalía has been nominated for seven Latin Grammy Awards, winning Best Engineered Album for "Arrasando" in 2001, and she was honored with the Premio de La Presidencia (President's Merit Award) at the 2019 ceremony. She has won five "Billboard" Latin Music Awards: Trayectoria Artistica (2001), Artista del Pueblo (2002), Premio de La Audiencia (2003), Latin Pop Album of The Year, Female (for "Thalía," 2003), and Hot Latin Songs, Artist Of The Year, Female (2014). Thalía has earned five BMI Music Awards, eight Lo Nuestro Awards, and a Fan Choice Award as well as numerous awards from the Premio Orgullosamente Latino, Premio Juventud, Premio Eres, Premio Gente, Premio Tú música, Premio Heraldo, and Premios TVyNovelas. She received a Special Silver Goddess award from the Mexican Cinema Journalists in 1997, and she earned a Directors Guild of America nomination for Outstanding Directorial Achievement in Children's Programs for "15: A Quinceañera Story" in 2018. Thalía received a star on the Hollywood Walk of Fame in 2013.

Real Estate: In 2010, Thalía and Tommy paid $2.85 million for an undeveloped 6-acre parcel of land in Greenwich, Connecticut. They spent three years designing and building their 9-bedroom, 12,300 square foot dream home, which features a footbridge to a small private island on the property's lake. They listed the property for sale in April 2017 and finally found a buyer in April 2019 for $14.875 million. 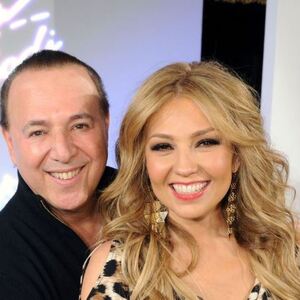