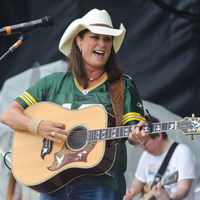 Terri Clark net worth: Terri Clark is a Canadian country music artist who has a net worth of $10 million. Terri Clark was born in Montreal, Quebec, Canada in August 1968. She moved to Nashville, Tennessee after graduating high school and started playing at Tootsie's Orchid Lounge. She was signed to a record deal by Keith Stegall of PolyGram/Mercury Records in 1994. Clark released her self-titled debut studio album in 1995. The album was certified 3x Platinum in Canada and Platinum in the US. It reached #2 on the Canadian Country and #13 on the US Country charts. The album contained the #1 Canadian Country single "If I Were You" and the singles "Better Things to Do" and "When Boy Meets Girl" which both hit #2 on the Canadian and US Country charts. Clark has released a total of 10 studio albums with her latest Some Songs being released in September 2014.She has also had #1 singles with "Poor Poor Pitiful Me", "Emotional Girl", "You're Easy on the Eyes", and "Girls Lie Too". She won Single of the Year and Album of the Year from the Canadian Country Music Association in 1996. She has won the Fans' Choice Award seven times and Female Artist of the Year three times.