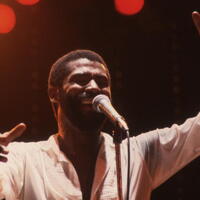 Teddy Pendergrass net worth: Teddy Pendergrass was an American R&B and soul singer and songwriter who had a net worth of $12 million dollars. Theodore DeReese Pendergrass was born in Philadelphia, Pennsylvania in March 1950 and passed away in January 2010. He sang in his church as a child and was ordained as a minister at the age of 10. He took up the drums and sang with the Edison Mastersingers. He dropped out of school in eleventh grade and recorded his first song. He played drums for The Cadillacs before becoming a lead singer. He recorded with Harold Melvin and the Blue Notes in 1972. Their song "If You Don't Know Me by Now" became a top 10 hit and made it to #1 on the soul singles chart. Pendergrass went solo and released his first album in 1977. He had five consecutive platinum albums from 1977 to 1981. He was popular for "women's only concerts" and was dubbed "the black Elvis". In 1982 Teddy was in a car accident that left him a quadriplegic who was paralyzed from the chest down. He continued on with his music and in 1985 made his first live performance since his accident. He retired from the music business in 2006 and was celebrated in 2007 for 25 years since his accident. He started the Teddy Pendergrass Alliance to help others with spinal cord injuries. He was nominated for four Grammy Awards in his career. Teddy Pendergrass died of respiratory failure on January 13, 2010.