Tariq Trotter net worth: Tariq Trotter is an American hip-hop artist who has a net worth of $12 million dollars. Tariq Trotter, also known as Black Thought, was born in Philadelphia, Pennsylvania, and went to school at the Philadelphia School for Creative and Performing Arts. From there, he went on to attend Millersville University.

He began performing with Ahmir "Questlove" Thompson in the late 80s. The duo added more musicians and began performing as The Square Roots in college. They subsequently shortened their name to The Roots, and released their first album, "Organix", in 1993. Their second album, "Do You Want Me", became quite popular with alternative music fans, and they began touring the alternative music circuit, including performing at Lollapalooza, the Montreux Jazz Festival, and finally, Woodstock 99. They achieved widespread fame with the release of their album, "Things Fall Apart", and won a Grammy in 2000. They have since released six more successful albums. In addition to his work with The Roots, Tariq Trotter has also appeared in such films as, "Bamboozled" and "Brooklyn Baby", and has also performed with numerous other artists. 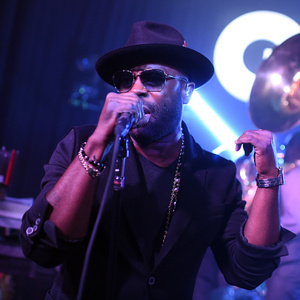