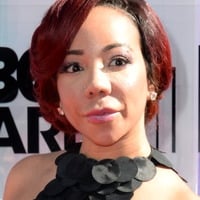 Tameka Cottle Net Worth: Tameka Cottle is an American musician who has a net worth of $3 million. Tameka Cottle was born in College Park, Georgia, in 1975. Tameka Cottle, who goes by the nickname Tiny, joined R&B group Xscape in 1992. She has been part of three platinum studio albums with Xscape: "Hummin' Comin' at 'Cha", "Off the Hook", and "Traces of My Lipstick". Cottle and Xscape won Soul Train Music Awards for Best R&B Album and Best New R&B Artist. The band broke up in 1998 and Cottle went on to sing on soundtracks for the films "Bad Boys", "Love Jones", "Panther", and "Soul Food". She also began writing music for other acts, and won a Grammy Award for Best R&B Song for writing "No Scrubs" for TLC with Kandi Burruss. Xscape reunited in 2005 to release the album "Unchained" and the single "What's Up". Four years later, Cottle landed a reality series, "Tiny and Toya", with Lil Wayne's ex-wife Antonia Wright. The show ran for two seasons on BET. Cottle released her solo debut single in the summer of 2014, which topped the R&B charts on iTunes. She began dating rapper T.I.. in 2001. They married nine years later and have two children together. The couple was arrested in Los Angeles for possession of ecstasy in 2010. A year later, they landed their own VH1 reality show, "T.I. & Tiny: The Family Hustle".