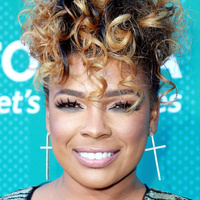 Syleena Johnson net worth: Syleena Johnson is an American singer-songwriter and actress who has a net worth of $2 million dollars. Born in Harvey, Illinois, Syleena Johnson grew up loving music, and is the daughter of accomplished R&B singer, Syl Johnson. She began singing while in school, and performed in various vocal ensembles throughout high school. After having nodules removed from her vocal chords, and undergoing two years of speech therapy, she began college at Drake University. She intended to focus on psychology, but her love of music proved too strong. She changed her major to music, and then changed schools, eventually graduating from Illinois State University. After passing a demo tape to a Jive Records executive at a charity basketball game, she was invited to sign with the label. She has since released six albums, and has received multiple music award nominations including Grammy, Billboard, and MTV Video Music Award nominations. She is appears on the popular TV One series, "R&B Divas" and is former football player Chad Johnson's sister. She also recently appeared on the hit reality series, "Marriage Bootcamp: Reality Stars", where she works on her relationship with husband, Kiwane Garris.