Susan Cowsill net worth: Susan Cowsill is an American musician, singer, and songwriter who has a net worth of $4 million. Susan Cowsill was born in Canton, Ohio in May 1959. Susan is the youngest member of The Cowsills. She started her career with The Cowsills in 1969 on the album We Can Fly.

She made her solo vocal debut on the song "Ask The Children" off the album Captain Sad And His Ship Of Fools. Susan became the younger person to ever be directly involved in a Top 10 hit record when Indian Lake reached the Top 10 in 1968 while she was nine years old. In 1976 Cowsill signed with Warner Bros. Records and released two singles. She worked as a backing vocalist for artists such as The Smithereens and Hootie & the Blowfish. She joined the Continental Drifters and occasionally appeared in the duo The Psycho Sisters. Her debut solo studio album Just Believe It was released in 2005. Her second album Lighthouse was released in 2010 and The Psycho Sisters debut album Up on the Chair, Beatrice was released in 2014. 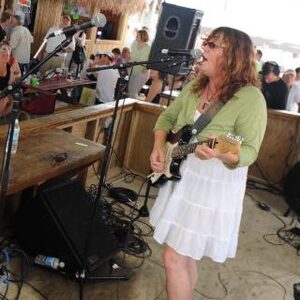