Suggs net worth: Suggs is an English singer-songwriter, musician, radio personality, and actor who has a net worth of $20 million. Suggs was born in Hastings, Sussex, England, United Kingdom in January 1961. He is best known for being the lead singer of the English ska band Madness. Madness formed in 1976 and helped revive 2 Tone ska. They co-hold a record for spending 214 weeks on the UK singles chart during the 1980s with UB40. Madness released their debut studio album One Step Beyond… in 1979 and their second album Absolutely in 1980 and both reached #2 in the UK. The band also released the albums 7 in 1981, The Rise & Fall in 1982, Keep Moving in 1984, Mad Not Mad in 1985, The Madness in 1988, Wonderful in 1999, The Dangermen Sessions Vol. 1 in 2005, The Liberty of Norton Folgate in 2009, and Oui Oui Si Si Ja Ja Da Da in 2012. The band's compilation albums Complete Madness and Divine Madness both reached #1 in the UK. Their most popular singles include "One Step Beyond", "It Must Be Love", "Our House", and "Wings of a Dove". Suggs has also released the solo albums The Lone Ranger, The Three Pyramids Club, and The Platinum Collection. 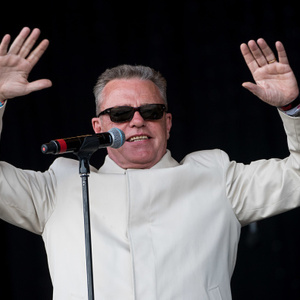