Stromae net worth: Stromae is a Belgian singer-songwriter who has a net worth of $5 million. Stromae was born in Etterbeek, Brussels, Belgium in March 1985. He is established in the genres of electronic music and hip hop. Stromae is best known for his #1 single "Alors on danse". He studied music and learned to play drums at the Academie musicale de Jette.

At 18 years old Stromae formed the rap group Suspicion. He released the mixtapes Freestyle Finest in 2006 and Mixture Elecstro in 2009. His debut extended play Juste un cerveau, un flow, un fond et un mic… was released in 2007. Stromae's debut studio album Cheese was released in 2010. The album went 3x Platinum in Belgium and Gold in France. It reached #1 in Belgium and made the top 10 in France and Greece. His second studio album Racine Carree was released in 2013. The album was 10x Platinum in Belgium, 3x Diamond in France, and 2x Platinum in Switzerland. It hit #1 in Belgium, France, Italy, the Netherlands, and Switzerland. His best known single "Alors on danse" reached #1 in Belgium, Austria, Denmark, France, Germany, Italy, the Netherlands, and Switzerland. He has also had #1 singles with "Papaoutai", "Formidable", and "Tous las memes". He has won awards from the NRJ Music Awards, Music Industry Awards, MTV Europe Music Awards, and World Music Awards. 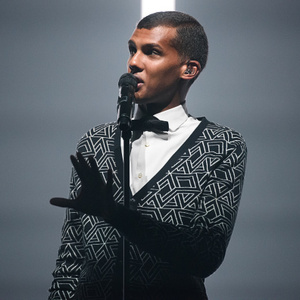