Stephen Sondheim net worth: Stephen Sondheim was an American composer and lyricist who had a net worth of $20 million at the time of his death. Stephen Sondheim died on November 26, 2021 at the age of 91. Thanks to his rare talent and devoted work both as a composer and a lyricist, Sondheim has produced great musical works, including A Funny Thing Happened on the Way to the Forum, Company, Follies, A Little Night Music, Sweeney Todd, Sunday in the Park with George and Into the Woods.

He is also the man behind the lyrics of West Side Story and Gypsy. In addition to writing lyrics for songs, he wrote material for movies like the 1981 Warren Beatty film Reds, for which he created the song "Goodbye For Now". Also, he wrote five songs for the 1990 action movie Dick Tracy, out of which the song Sooner or Later (I Always Get My Man) won the Academy Award for Best Song. Being the author of all these invaluable contributions to musical theater, Sondheim is the winner of an Academy Award, eight Tony Awards including the Special Tony Award for Lifetime Achievement in the Theatre, multiple Grammy Awards, a Pulitzer Prize and the Laurence Olivier Award. The period from 1973 to 1981 marks another aspect of Sondheim's career, as a president of the Dramatists Guild. In honor of his 80th birthday, on September 15th 2010, the Henry Miller's Theatre was renamed the Stephen Sondheim Theatre, while BBC staged a concert in his honor. 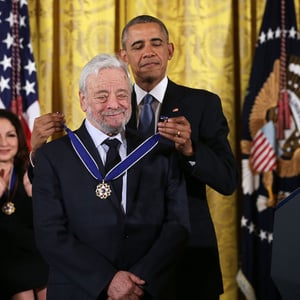