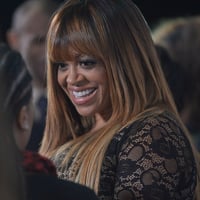 Stacy Francis Net Worth: Stacy Francis is an American actress and singer who has a net worth of $4 million. Stacy Francis was born in Brooklyn, New York in April 1969. Stacy was a part of the all female group Ex Girlfriend who released two albums on Reprise Records. She also starred on Broadway in Footloose. Francis was a contestant on the reality TV series The X Factor USA for its first season in 2011. In 2012 she released the singles "Purple Rain" and "I Am the Change". As an actress she made her debut in the 1990 movie The Bonfire of the Vanities. She has appeared in episodes of the TV series Third Watch, Strong Medicine, Yes, Dear, Son of the Beach, Fastlane, Half & Half, and Phil of the Future. Francis has also appeared in the 2002 TV movie In My Opinion, in the video Friends and Lovers in 2005, and in the shorts The Club in 2008 and The Citation in 2009. Stacy performed for Tom Cruise at his 40th birthday.