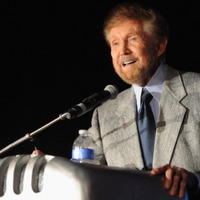 Sonny James net worth: Sonny James is an American country music singer and songwriter who has a net worth of $4 million. Sonny James was born in Hackleburg, Alabama in May 1929. He is best known for his 1957 hit song "Young Love". James has been called the Southern Gentlemen and has 72 hit songs from 1953 to 1983. He also had a streak of 16 straight #1 hits over a five year period. James had 21 albums make the Top 10 on the Country charts and is a member of the Country Music Hall of Fame. He received a star on the Hollywood Walk of Fame at 6630 Hollywood Blvd. He has also been inducted into the Alabama Music Hall of Fame and the Hit Parade Hall of Fame. His debut album The Southern Gentlemen was released on Capitol Records in 1957. His single "Young Love" reached #1 on the US Country, Billboard Hot 100, and Cashbox charts. James' other popular singles include "Lovesick Blues", "I Forgot More Than You'll Ever Know", "Apache", "The Minute You're Gone", "You're the Only World I Know", "Behind the Tear", "Take Good Care of Her", "Need You", "I'll Never Find Another You", "It's the Little Things", "A World of Our Own", "Heaven Says Hello", "Only the Lonely", "Running Bear", "Since I Met You Baby", "It's Just a Matter of Time", "My Love", "Don't Keep Me Hangin' On", "Endlessly", "Empty Arms", "Bright Lights Big City", "Here Comes Honey Again", "Only Love Can Break a Heart", "That's Why I Love You Like I Do", "When the Snow Is on the Roses", "Is It Wrong (For Loving You)", "In the Jailhouse Now", and "Abilene".