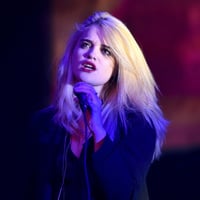 Sky Ferreira net worth: Sky Tonia Ferreira is an American model, singer-songwriter, and actress who has a net worth of $1 million. She was born on July 8, 1992 in Los Angeles, and was raised primarily by her grandmother who was Michael Jackson's personal stylist for over thirty years. As a teenager she began modeling and uploading videos to the Internet where she was singing songs she had written. Because of her MySpace posts, she was discovered by producers Bloodshy & Avant and eventually earned a recording contract with Parlophone in 2009. In 2010, she appeared in the film, Putty Hill and also appeared in the magazines, Dazed & Confused and Interview. Ferreira has released two albums since her start, but it has not happened without its share of roadblocks. After years of label battles, the controversy-prone artist released her debut album, Night Time, My Time in 2013. The album marked her unique style of incorporating indie rock with synthpop elements. During this same year, she appeared in The Green Inferno and received some unwanted media attention after being arrested for drug possession. She was exposed to a mainstream audience after joining the Bangerz Tour, which began on February 14, 2014 and was headlined by Miley Cyrus. While exploring her music career, she continues to model and most recently worked on a campaign for Redken hair products.